Man Who Reportedly Sang Song While Killing Teen Sentenced: "He Showed No Remorse"

Keith Meiners, 21, reportedly sang a rock song while he was killing James Robert "JJ" Willman, age nineteen, back in 2010.

But this week when he was sentenced to spend 25 years behind bars, he was quiet and expressionless -- except for one moment when he smiled at the victim's family, according to Willman's relatives.

"He showed no remorse," says Kristin Durbin, who was at the sentencing hearing on Monday and is the former girlfriend of Willman's father.

She tells Daily RFT that the victim's family members, who were hoping for a stiffer sentence, saw Meiners "smirking" on their way out. And, she says, he winked at them, too.

That kind of behavior may not be entirely surprising for a murder suspect who reportedly sang "Ain't No Rest for the Wicked," a song by rock band Cage the Elephant, as he strangled Willman, a Woodson Terrace teenager.

Meiners, convicted of beating Willman and leaving him to die in a field, got his 25-year sentence on Monday on a second-degree murder charge, despite the family's push for a first-degree conviction.

The decision marks the end of a long saga that began when Willman went missing in November and was not found for months after. Eventually, police located his car, which was stripped of its license plate, and then discovered his body in March of 2011 in the woods off of Columbia Bottoms Road in north St. Louis County.

"There is some closure," says Durbin, a 40-year-old Maplewood resident who runs the Facebook page in the teenager's honor. "It's never going to be complete. Watching the news and seeing the posters, the old pictures from when he was missing. That will never be forgotten. And the pain of him not being here will never be forgotten."

Meiners allegedly confessed to singing while he strangled Willman and said to a friend after the homicide: "Took care of my problem."

Prosecutors said in court that Meiners was jealous about a girl, lured Willman away from a party under false pretenses then beat him by stepping on his throat until he stopped breathing.

The family, Durbin says, is grateful that he will at least be spending time behind bars for the near future.

"A lot of kids were afraid of him. The simple fact that he is going to be gone for a long time I'm sure is soothing for the kids and for the families," she says.

Durbin adds, "He showed no emotion throughout the entire trial."

Willman, who would have turned 22 next week, was "a great friend to many" and "did whatever he could for anyone," she says.

Durbin says she is grateful for all the assistance the family has received from supporters on Facebook and elsewhere who publicized his face when he went missing, helping police solve the case.

"We want to make sure that everyone knows that we appreciate everything they did for us," she says. 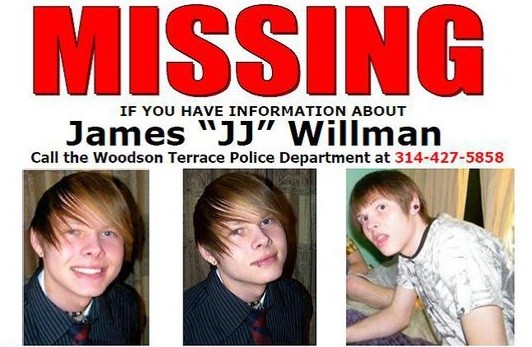 In high school, Willman often made friends with new students or loners and did his best to make everyone feel welcome, Durbin says. And he was really close with his brother Jake.

In an e-mail to us, Durbin adds, "He was a nineteen-year-old who had his entire life ahead of him and was cut short because of another young man who was unable to deal with his hatred and anger for others his age."