Cupples 7: Demolition To Begin Next Week On Historic Site As Advocates Push For Rehab

Demolition of the historic Cupples 7 building in downtown St. Louis may begin as early as next week, but some advocates in the city are still pushing for an alternative rehabilitation option for the decaying property.

Preservationists hoping to see the site saved from the wrecking ball tell Daily RFT that the city has been uninterested in development proposals to avoid demolition. Officials with the city, however, say that the site at this point is a serious public safety hazard and that they can only consider plans with legitimate financial backing that would allow for an immediate stabilization.

"We understand the historical significance of Cupples and do not take this decision lightly," Tishaura Jones, treasurer of the city of St. Louis, tells Daily RFT, adding, "We've inherited this."

What would it take to save Cupples 7?

See also: - Pevely Dairy: After Long Fight, Why Doesn't Saint Louis University Have a Plan? - City Says Historic Cupples 7 Will Be Demolished Unless a Developer Steps Up

Cupples 7 is a seven-story brick building and the only structure in the historic Cupples Station complex that hasn't been renovated. Eames and Young constructed the complex for Samuel Cupples between 1894 and 1917. The buildings are on the National Register of Historic Places, but Cupples 7 -- on 11th and Spruce streets -- was condemned by the city in 2008. Developer Kevin McGowan of Ballpark Lofts III LLC owns the property and Montgomery Bank is the lender on a project that didn't succeed.

Last month, city officials declared the property to be in such poor condition that it must be fixed up by a developer now -- or torn down. In that announcement, city officials said that if an angel investor showed up with a development plan to immediately address the public safety hazard, they would be more than happy to avoid demolishing it.

But in the weeks since that announcement, according to some preservationists, the city has not taken any offers seriously.

"It just seems like a big hurry to brush this whole thing under the rug," Michael Allen of the Preservation Research Office, a St. Louis firm, tells Daily RFT.

Allen says he has a client who expressed interest in Cupples 7 -- but got nowhere.

"They just got cold shoulders," says Allen. "It's just, 'No. We are not dealing with it.'"

He says of the city's call for developers, "When those angels start coming forward, they smack their wings down."

He and others argue that the city should be using the money earmarked for demolition as an incentive for developers interested in stabilization. Critics say that it would be a bad deal for taxpayers if the building is demolished and the city takes over the property.

The city has said that it could cost as much as $8 million just to simply stabilize the property -- and tens of millions of dollars more to renovate it, but Allen says he's not convinced that is a solid, well-researched estimate.

St. Louis officials, however, says these estimates come from engineers and argue that the need to stop the structure from potentially hurting a passerby is urgent.

For her part, Jones says that she is not actively blocking developers.

"We welcome any developer to contact the bank directly and they can have the building," Jones says. "We have not stood in the way of any developer."

She says the fact is that with "every developer that has contacted the city, financing has been the key problem."

Jones explains that her office is obligated to purchase the property if a demolition permit is issued as per an agreement arranged by her predecessor, former treasurer Larry Williams. (He made this agreement to avoid another developer replacing Cupples 7 with more parking).

If the demolition moves forward, her office must contractually buy the property, she says. But in any other plans that don't involve demolition, it would be "fiscally irresponsible" for the treasurer to buy it when it's not mandated, she adds.

Continue for more response from the treasurer's office and the mayor's office.

Jared Boyd, chief of staff and chief counsel to the treasurer, says, "From an emotional perspective, it is tough to see a building that is historic be demolished. It is also tough to attribute blame when a building has been allowed to go down this road for ten years."

He says, "We're very open to working with any developer.... It's one thing to want to do it. It's another thing to have a feasible plan in place." 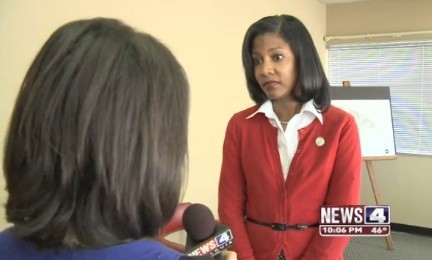 "This is not an ideal situation," Jones says. "However, we are stuck with this option...and have to execute it."

Maggie Crane, spokeswoman for Mayor Francis Slay, reiterates that the city would avoid demolition -- if a developer with necessary cash shows up in the next week.

"Our end goal is absolutely to have somebody come in and save the building," she says, "but public safety has got to come first. We have been asking for developers to come forward since November."

She continues, "We hope, we pray that someone can come in with the money."

But in its current condition, she says, "We do not believe Cupples 7 can withstand another winter."