Randy Miller, a 48-year-old New Athens, Illinois, resident, got into an argument with his girlfriend last week -- prompting him to strike her in the leg with a crowbar, according to the St. Clair County Sheriff's Department. He then picked up a hammer and hit her on the head, cops say.

According to the sheriff's office, Miller then retrieved his gun and his dog, a rottweiler, took the animal to a nearby shed and shot him dead.

Then he went after his girlfriend's chihuahua.

See also: - Illinois Man Sentenced for Plot to Abduct Man, Electrocute Him, Frame a Cat - Benetta Johnson Guilty in Puppy-Dragging Trial, Breaks Down Sobbing - Man Accused of Dragging Puppy "Like It's a Stuffed Animal" Says Vet Told Him To

After his own dog was dead, Miller went back to his girlfriend and grabbed her chihuahua off of her lap -- holding the little dog by its neck, police say.

At this point, he took the dog to a barn and shot it dead, too.

By the time police arrived, there was little doubt about what had happened; a witness to the offense, the sheriff's office says, showed deputies a "freshly dug burial site where the two dogs were placed." 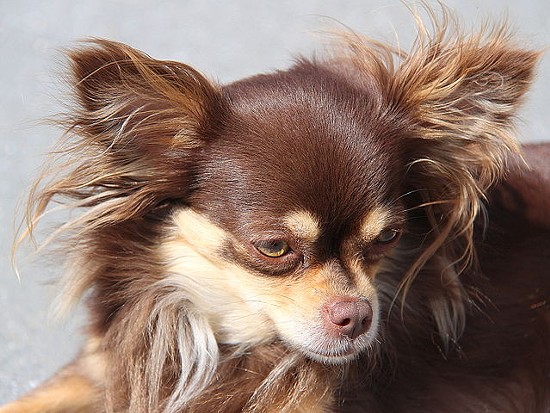 Miller, who lives on 8641 Haas Lane off of Baldwin Road, was taken into custody last Monday around 11 a.m.

Miller has since been charged with felony firearm possession, felony aggravated cruelty to animals and two counts of misdemeanor domestic battery. A St. Clair County judge set Miller's bond at $50,000 and the man is currently behind bars.

Here's the full report from the sheriff's office:

On Monday, May 27th, 2013 at 11:00 am, St. Clair County Sheriff's Department Deputy Jeffrey Hartsoe was called to the 8000 block of Haas Lane in New Athens in reference to a Domestic Battery and Criminal Damage to Property complaint. The victim reported she and her boyfriend later identified as:

Required by the Illinois Supreme Court: All suspects are considered innocent until found guilty in a court of law.