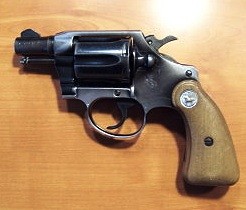 A seven-year-old girl was shot last night when a woman's purse fell to the floor -- causing her .38-caliber handgun to discharge, a St. Louis county police spokesman says. The bullet hit her in the leg.

The shooting took place at the 12300 block of Tempo Drive, near Interstate 270 in west St. Louis county in the home of Sondra Taylor, who owned the purse. Police say she is a friend of the victim's mother.

The girl was taken to St. Mercy's Hospital for treatment, but police say that, fortunately, her injuries were minor.

Officials say she was hit in the right leg and that the bullet came from a Cobra .38 that was in Taylor's purse. County police responded to the home last night at around 6 p.m. and seized the weapon.

Police say the incident currently stands as an accidental shooting, but is still under investigation. The Department of Children Services was notified as well.

The Post-Dispatch also adds that the victim's mother was in the home at the time. She is reportedly a massage therapist and had come over to give a massage to Taylor and her seventeen-year-old daughter.

The two women were allegedly in another room when the gun went off and hit the little girl.

Meanwhile, north county police officials say that in a separate incident, a fourteen-year-old boy was shot in the hip outside of a party at the 10500 block of Renfrew Drive. There are no suspects in custody as of this writing -- and the young teenager is expected to survive, police say.