Teens Allegedly Brag About Stealing 100 Pounds of Explosives: "It Was The Good Stuff"

Weeks ago, we reported that 100 pounds of explosives was missing from a Troy business and, at the time, the Lincoln County Sheriff's Office had no idea who might have taken them or what they might have been planning.

When detectives located Huber, he allegedly told them they had been drinking beer and riding an ATV that day when they decided to steal large pieces of scrap metal -- and then some explosives in a secured trailer. Why? "It was the good stuff," he told them.

Detectives soon learned that the two hadn't just stolen metal scraps and explosives. The ATV the two were riding that night, cops say, was also stolen from Ballwin.

Fortunately, it appears they did not actually use "the good stuff" before federal investigators were able to locate them.

At the time of the May 14 theft in Troy, area residents reported to cops that they heard an ATV in the area, and detectives observed ATV tracks during their investigation -- which seems to have helped them identify the suspects.

Along with the tips about their bragging.

Cops found Huber at his residence in Moscow Mills, where he reportedly told them that once they found the metal scraps, they went and got Wilcockson's truck and returned. Eventually, he confessed, they took the explosives and stored them at Wilcockson's house on the 200 block of Firehouse Lane in Troy, police say.

With a search warrant, sheriffs found the explosives, and the Bureau of Alcohol, Tobacco, Firearms and Explosives confiscated them.

"I want to thank the community for the multiple tips into this case," Sheriff John Cottle says in a statement. "I am just thankful my detectives and the community worked closely to find the culprits and was able to recover the explosives before someone got seriously hurt."

Huber was promptly arrested for theft of an explosive weapon, tampering with a motor vehicle in the first-degree and trespassing. He is currently being held on bond.

Meanwhile, an arrest warrant has been issued for Wilcockson, who is still at large, police say. 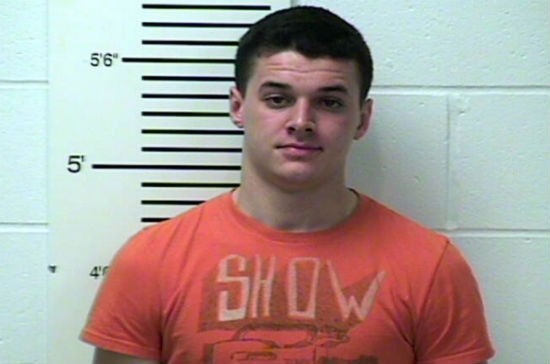 Lincoln County Sheriff's officials ask that anyone with information on his whereabouts to call 636-528-8546 or submit a tip via www.lcsdmo.com.