Oshay Caves: Jennings Mother Calls Police To Report That Her Son Had Been Shot 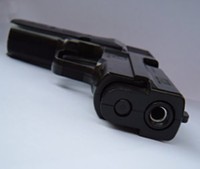 Very early this morning, a mother in Jennings reached out to police with a call no parent ever wants to make. Her son had been shot.

By the time cops arrived to the Hamilton Avenue home, her child, Oshay Caves, was dead.

The 911 call came in at around 2:16 a.m., prompting a response from the county police department's Jennings detail. The victim's mother told police that her son had been shot, officials say.

When officers made it to the home on the 5200 block of Hamilton Avenue, the young man was already deceased.

The investigation is ongoing, but officials note that they "are following up on numerous leads at this time."

As of this writing, no arrests or charges have been made.

Officers from the St. Louis County Police Department Jennings Detail responded to the 5200 Hamilton for a report of a shooting. The reporting party, the mother of the victim, stated that her 21 year old son had been shot. Officers found the victim deceased in front of the home on arrival. The victim was identified as:

The investigation is being conducted by detectives from the St. Louis County Police Department Division of Criminal Investigation Crimes Against Persons Unit, who are following up on numerous leads at this time. The victim was apparently targeted following a confrontation. Any further information will be released at a later date if necessary or if charges are issued by the St. Louis County Prosecuting Attorney's Office.