Organizing for Action-Missouri, the nonprofit offshoot of Barack Obama's reelection campaign, is staging a protest today to pressure Wagner to acknowledge that climate change is real. Why Wagner? The group says that the Missouri Republican has dodged questions of climate change in the past, and one local volunteer with the organization points Daily RFT to comments she made in an e-mail that are alarming to some environmental advocates.

Wagner wrote, "The field of climate science is in its relative infancy and it appears that some within the public policy world have made dubious assessments of scientific information in order to further their own political agenda. Our policy response to this dilemma should not be based on inconsistent and unsound science or driven by the fear of a supposed catastrophe."

The comments from Wanger were published on an obscure blog, in which the writer says that this was the a form letter the congresswoman's office sent in response to an inquiry with the subject "climate change."

A spokesman for Wagner, the freshman congresswoman who represents the state's second district, confirms to Daily RFT that this is her letter.

As of this writing, he has not offered us any additional comment regarding the congresswoman's stance on climate science or today's protest outside her office. 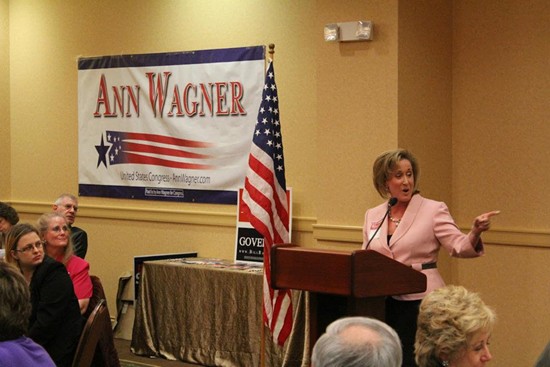 The letter from Wagner, full statement below, also offered this commentary on climate change before delving into her skepticism on the science:

It is our responsibility to leave this nation in the same or better condition to ensure that future generations can thrive and prosper. The theory of climate change is one of the most hotly debated issues concerning the environment and politics. One issue that needs no debate is that climate is inherently variable and, thus, constantly changing.

Organizing for Action -- which aims to promote the president's agenda on the ground, but is no longer affiliated with Obama -- is going after members of Congress across the country who have rejected climate-change science and refuse to acknowledge human contributions to this problem. The group is advocating for bipartisan climate legislation in D.C.

In Missouri, OFA has staged gun control, immigration and sequestration rallies in recent months and in the area of climate change, is starting with Wagner as a target.

"The science is long since settled," says Ken Denson, an OFA-MO volunteer from Chesterfield, who pointed us to the blog post with Wagner's climate comments. "We are going to confront those who are actively denying the existence of climate change, actively denying that something needs to be done.... You are out of touch with the interests of your constituents."

Denson, who is part of OFA's Creve Coeur-Olivette chapter and is a member of the organization's climate change working group, says it's time politicians on both sides of the aisle get serious about this threat.

"This is very clear," he says. "This isn't really a political issue. It's a moral issue."

It seems there's not a whole lot published on Wagner's climate change stance, though the Post-Dispatch briefly noted in a recent profile -- which Wagner's office promoted -- that she co-sponsored legislation that would forbid sending money to the United Nations to study global warning.

Continue for more on OFA-MO's planned actions and the full commentary from Wagner on climate change.

"There is obviously a core political [group]...that is doing everything in their power to make sure we don't do anything on climate," he says, "that we don't change the status quo." 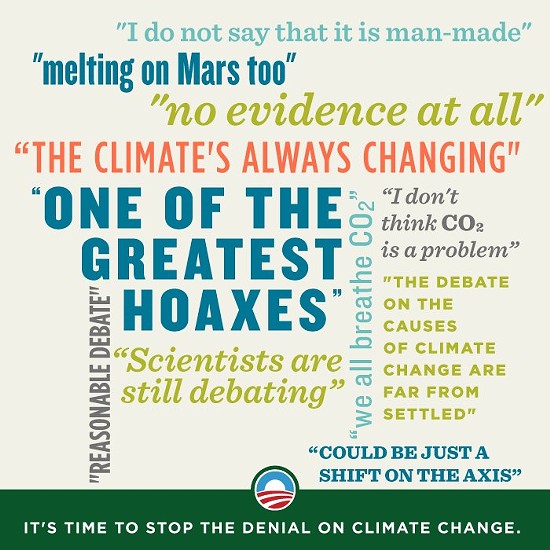 Denson, a 63-year-old who works in information technology and has been involved in environmental activism for decades, says that it's time to stop blocking meaningful efforts to address climate change.

"We need you to be a participant," he says. "A helper, not a force for resistance and obstruction."

OFA-MO volunteers and Sierra Club members are meeting at Wagner's district office at 301 Sovereign Court in Ballwin today at noon for the protest.

Thank you for contacting me with your concerns regarding climate change. I appreciate your views on this issue and welcome the opportunity to respond.

Like you, I firmly believe in protecting our environment and natural resources for future generations. It is our responsibility to leave this nation in the same or better condition to ensure that future generations can thrive and prosper. The theory of climate change is one of the most hotly debated issues concerning the environment and politics. One issue that needs no debate is that climate is inherently variable and, thus, constantly changing. The field of climate science is in its relative infancy and it appears that some within the public policy world have made dubious assessments of scientific information in order to further their own political agenda.

Our policy response to this dilemma should not be based on inconsistent and unsound science or driven by the fear of a supposed catastrophe. I believe that we can harness the power of American innovation to adapt and mitigate effects so that our path forward does not threaten the economic stability of the nation. All policies that involve climate change must pass three vital tests; they must work environmentally, they must be economically sound, and they must be practical.

Environmental interests groups suggest a number of solutions to stop the increase of greenhouse gas emissions including a "cap-and-trade" system, a carbon tax, and complete Environmental Protection Agency (EPA) regulation of carbon emissions. These supposed solutions fail to pass any of the tests that are essential for effective policy. They fail to deliver promised environmental benefits, as evidenced by EPA Administrator Lisa Jackson's concession in a 2010 hearing that the cap-and-trade bill "will not ultimately be able to change the amount of carbon dioxide that is accumulating in the atmosphere." These proposals fail economically as they would drain trillions of dollars from our economy, decreasing economic growth and costing millions of jobs lost to countries with no environmental regulations. These plans also fail the test of practicality as they incur massive costs without guaranteeing any actual benefits.

Additionally, you may be interested to know that the U.S. has actually decreased our annual carbon emissions by 10.7 percent without employing top-down regulations, mandates, or taxes. This achievement puts us more than halfway toward fulfilling our commitment to reduce emissions by 20 percent by 2020. This development is encouraging, especially when coupled with the fact that there has been no global warming trend in more than 15 years.

Again, thank you for contacting me. Having the benefit of your views and the views of all Missourians allows me to better represent the people of the 2nd Congressional District. In that regard, your input is most helpful.

For additional information on current legislation and my representation of the 2nd Congressional District, I invite you to visit my website at http://www.wagner.house.gov.

And here is OFA-MO's media advisory.

OFA-Missouri visits Ann Wagner's Office to tell Congress "Climate Change is real -- and if we're going to have a national conversation on the issue, we need members of Congress to admit that"

St. Louis, MO - This Wednesday, May 29th, Organizing for Action volunteers from Missouri and community members from the St. Louis area will gather to tell Ann Wagner that the time to accept that climate change is real is now. Climate Change is real -- and if we're going to have a national conversation on the issue, we need members of Congress to admit that. With climate change legislation we will be able to strengthen our economy and strengthen our country's future.