Two Puppies Dead After Being Thrown Out of Moving SUV Onto Alorton Interstate, Cops Say

Yesterday, a driver threw two puppies out of a moving SUV onto an interstate in Alorton and unlike Lindey, the Kansas City german shepherd who recovered after a brutal fall, these two little pups did not survive.

Police say that the puppies -- one white and one brown -- died in the incident when they were hit by another car.

It's possible they may have been hit by more than one car.

The suspect or suspects at this point remains unknown.

The horrible incident happened on Interstate 225 North near Route 15 in Alorton, KSDK (Channel 5) reports. It was around 2 a.m. in the morning when the dogs were thrown to their death, officials say. 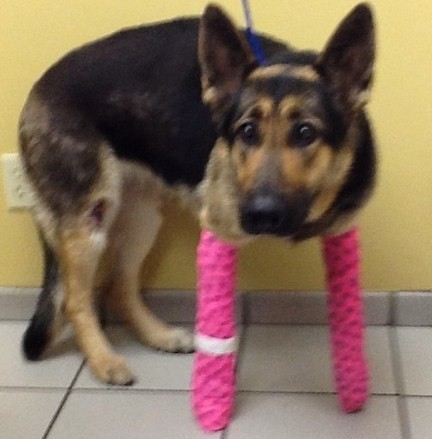 It appears that there were other cars on the roadway at the time -- though no drivers were hurt in the incident. It's unclear what breeds the dogs were.

If caught, the suspects could face felony charges of aggravated animal cruelty.

Witnesses, police say, called in with details yesterday about the thrown puppies -- but they did not have a license plate number. Cops say it was a white Ford Expedition.

The case is similar to a dog-throwing incident in Kansas City earlier this year when a german shepherd later named "Lucky Lindey" was sent flying over a 40-foot-tall overpass. In this case, the dog was very badly injured but somehow survived and required intensive surgery after good samaritan passersby helped rescue her.