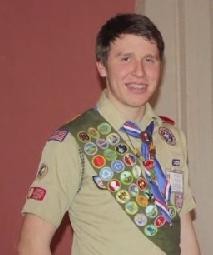 Yesterday, the Boy Scouts of America's National Council voted to open its membership rolls to gay teenagers. Another way to read that: They will stop kicking gay scouts out.

"This policy change is effective Jan. 1, 2014," says a statement from the National Council, posted on the Greater St. Louis Area Council's website. "While people have different opinions about this policy, we can all agree that kids are better off when they are in Scouting."

This decision comes too late for former Eagle Scout Eric Jones, who was kicked out of the Scouts after telling his boss at a summer camp that he is gay. This week, secret footage of the moment the camp director tells Jones he's out of the program hit the web.

Jones's story came out last summer, after he was dismissed from Camp Geiger in St. Joseph. Jones decided to tell his boss at the camp about his orientation believing that he'd "proven himself" as an employee and that it was consistent with his Boy Scout pledge to be honest about his sexual identity.

Jones must have had more than an inkling that it wasn't going to go well, because he brought a hidden camera with him. He was nineteen at the time. Here's what happened:

Here's what is said:

Jones: This past year, I've kind of been having, like, an issue. I've been kind of struggling and maybe it wasn't the best thing to run off to camp, but I just want to say that I'm gay. And I'm not sure what to do --

Camp director: OK, now, once you told me that you know we've got a problem. OK. I understand and quite honestly as far as I'm concerned your lifestyle is your lifestyle. It has nothing whatsoever to do with the way I look at an individual or the way I judge one. However, by telling me what you just told me it automatically takes you out of the program. I wish you hadn't done that.

Although neither Jones nor the camp director are identified in the clip, The Advocate writes that it is Jones and that the footage was provided by Ryan James Yezak, the director of a forthcoming documentary called Second Class Citizens. The clip was released this week ahead of Thursday's BSA Council vote.

Update: Jones tells Daily RFT that while he's happy about yesterday's National Council decision he has quite a few reservations, in particular about how well this policy will be implemented in Catholic or Mormon boy scout troops, and the fact that homosexual adult leaders are still not allowed by BSA policy.

"[Gay scout members will] go up through the program becoming leaders in their troops, they're going to turn 18 and get kicked out of the program they spent so much time in," says Jones. "That kind of bothers me."

At the time that he was asked to leave the scouts, Jones was an adult leader and so he would still not be allowed to return -- not that he'd want to.

"Why would I want to go back to an organization that isn't going to accept how much work I'm willing to give them?" says Jones, who is now 20 and working his way toward a college degree. "But what I am willing to fight for is my future self that is going to want to be a parent. If my kid decides to be in scouting, I want to have that experience with him because I had a great experience with my father scouting."

Daily RFT asked the Greater St. Louis Area Council for comment on Thursday's decision and whether or not former scouts like Jones will be invited to come back. We're told the council's leaders are still in Dallas and returning calls from the road. We'll update if we hear back.