People may gripe about the heat and humidity of St. Louis in the summer. But ask someone to share his or her favorite memory about this town, and chances are you're going to hear a story about something that happened between May and September.

Why? Because summer is when we get together with friends and share. When we slow down just long enough to appreciate all that is here for the taking. And as RFT discovered when we sat down to brainstorm what we love about summer in St. Louis, the reasons could be infinite. Here, though, are 25 places to begin.

1. Mike Shannon.With his references to "high hard ones," his catch phrase "get up, baby!" and his near-constant cackling, you'd be forgiven for thinking you've stumbled upon the rants of a ham radio operator or a senile Viagra pitchman. Nope. That's just "the voice" (TM) of the St. Louis Cardinals. And while Shannon's delivery may be out of the strike zone, his radio ruminations in St. Louis are as much the sound of summer as the singing cicadas.

2. Pork steaks. They're a St. Louis delicacy, these sliced strips of pork shoulder. Pro tip: Cook these babies on a low heat for 90 minutes and brush with another St. Louis original -- Maull's barbecue sauce.

3. Circus Flora. Circus the way circus was meant to be. This magical big top sets up shop each summer in midtown, offering its fans an intimate and upclose view of perennial favorites such as the peewee acrobats St. Louis Arches and the death-defying high-wire act the Flying Wallendas. And at what other circus do you get to meet the performers after the show? (3547 Olive Street; 314-289-4040)

4. Washers. Bags (a.k.a. "cornhole") may be all the rage these days, but washers remains the official lawn game of St. Louis. While its origins remain a mystery, it was likely created when one southsider said to another, "Bet I can throw this washer into that Busch can over yonder."

5. Free concerts. From the mega stages of Fair Saint Louis to weekly concerts at the Missouri Botanical Garden and downtown Kirkwood to the monthly shows at municipal parks like Maplewood's Ryan Hummert, it might just be possible to experience free music under the stars every summer night in St. Louis.

6. Float trips. While authorities have cracked down in recent years by banning beer bongs, Jell-O shots and Mardi Gras beads on some of the state's rowdiest rivers, float trips remain a damn good time and something of a summertime rite of passage for those looking to connect with their inner hoosier.

7. Patio cocktails. St. Louis bars and restaurants have fully embraced alfresco dining -- and imbibing! -- in recent years with damn near every establishment offering some kind of outdoor seating. So grab a friend or a book or -- dare we say it, the print edition of the RFT -- and get yourself to your favorite patio pronto for an ice-cold G&T.

8. The Muny. Who has America's oldest and largest outdoor musical theater? We do! Catching a show at the Muny is always cool, and this summer it will be even cooler -- literally -- as the theater debuts a new outdoor air-conditioning feature. (Forest Park; 314-361-1900)

10. Riverboat cruises. Few St. Louisans have any connection to the Mississippi River anymore. But that doesn't mean you can't experience Ol' Man River in the fashion of Mark Twain. Each day Gateway Arch Riverboats offers multiple excursions aboard its replica riverboats. Best bets are the evening dinner cruises with a banjo band or the monthly "blues cruise" featuring local acts such as Billy Peek and Big George Brock. (11 North Fourth Street; 1-877-982-1410)

11. Grant's Farm. Sure, you have to endure polka music blaring in the background, but that's a small price to pay for the free beer that awaits in the beautiful and historic "bauernhof" courtyard inside Grant's Farm. (10501 Gravois Road, Affton; 314-843-1700)

12. Carny food. Funnel cake. Corn dogs. Kettle corn. Cotton candy. Turkey legs. These are the flavors of summer found at multiple festivals over the next few months. But for a truly exotic take on carnival food, don't miss Festival of Nations this August in Tower Grove Park where the food -- featuring fare from dozens of countries -- is the main attraction. 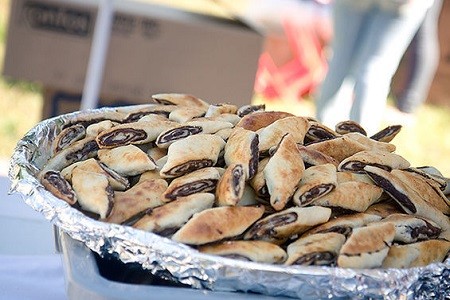 13. Outdoor movies. IMAX and 3-D films at the multiplex are nice, but if you want the ultimate movie experience, try spreading out a blanket on the lawn and catching a picture in the great outdoors. Frontyard Features offers free showings of classic films at municipal parks across St. Louis -- including those in Lafayette Square, the Central West End and University City. (Various locations; www.facebook.com/fyfstl)

14. Farmers' markets. It seems everywhere you turn these days -- Tower Grove (photo above), Clayton, Maplewood, Ferguson -- there's a farmers' market offering locally sourced produce and meats. But more than just a place to grocery shop, many of these markets also provide great live music and a chance to socialize with like-minded foodies.

15. Paddle boats at Forest Park. If you're like us, you don't know your aft from your ass, your stern from your sternum. No problem. You hardly have to be Captain Ahab to pilot your way through the lagoons of Forest Park on board a paddle boat available at the Boathouse. These miniature ships are a great way to take in the views of St. Louis' crown jewel. They also provide a hell of a workout. (6101 Government Drive; 314-367-2224)

16. Winery trips. Missouri's wineries have made great strides over the years, producing some truly stellar varietals. And St. Louis lies within striking distance of some of the best and most beautiful of these wineries with Augusta, Ste. Genevieve and Hermann all within a two-hour drive.

18. Beer leagues. Perhaps it's that we all look so fantastic in short shorts and knee-high socks. But there's something about summer in St. Louis that has us all -- regardless of gender -- wanting to haul a cooler full of beer to the nearest field for a friendly (and at times competitive) game of ball. And we're not just talking softball. These days adult kickball leagues threaten to boot softball from its perch.

19. Fireworks stands. Ordinances prohibit the sale of fireworks in St. Louis County. The same cannot be said of St. Charles, Jefferson or Franklin counties where local officials are a bit more lax about pyrotechnics, and colorful roadside vendors are only too happy to sell you a stockpile that could rival the military firepower of, say, Paraguay. USA! USA! USA!

20. St. Louis fashion. A few years ago Esquire magazine ranked St. Louis as one of the least fashionable cities in America, noting: "In a city that conflates fashion and fandom, the question isn't whether you're going to put on sweatpants; it's whether you're going to put on the good' pair." Obviously, Esquire's fashionistas did not visit St. Louis in the summer. Had they, they'd have witnessed jean cutoffs in the place of sweatpants. And while we're at it, what's up with men in matching plaid shorts and shirts in St. Louis? FYI: It looks like you're wearing pajamas.

21. Johnson's Shut-Ins. The manmade waterworks at Raging Rivers and Six Flag's Hurricane Harbor are a lot of fun, but they're not nearly as cool and awe-inspiring as the natural chutes, eddies and waterfalls found a mere two hours south of St. Louis at Johnson's Shut-Ins State Park. (Near the intersection of MO-N and MO-mm, Lesterville; 573-546-2450)

22. Citygarden fountains. If Johnson's Shut-Ins is too far, hop on the MetroLink and head downtown to Citygarden where the dancing fountain and wading pool offer a welcome respite from the city heat. (801 Market Street; 314-241-7070)

23. Fair Saint Louis. Big-name musical acts, daily air shows and nightly fireworks. Oh, and did we mention it's all free? The weekend of July 4th, the downtown riverfront is the place to be.

24. Above-ground pools. Is there anything more St. Louis than a big metal tub in the back yard? What these pools lack in modern amenities (diving boards, chlorine) they make up for in good, old-fashioned fun. Try as you might, you'll never make a whirlpool by running around an in-ground pool.

25. Shakespeare in the Park. For three weeks each summer Forest Park hosts a free Shakespeare play under the trees just east of Art Hill. This year's play is the bard's comedy Twelfth Night. Bring some friends, pack a picnic and arrive any day but Tuesday from May 24 to June 16.