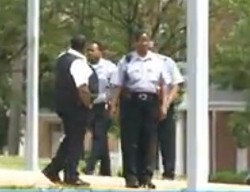 Did a security officer at Clyde C. Miller Career Academy, a St. Louis high school, pepper spray students in an effort to break up some sort of a food fight?

That's the allegation of a KSDK-TV (Channel 5) story, which says that, according to students leaving the building at dismissal, a guard decided to use Mace to end a conflict yesterday.

Officials with St. Louis Public Schools tell Daily RFT that an incident did take place, but declined to offer any further details or confirm whether an official did use pepper spray.

The SLPS statement says in full:

SLPS is aware of an incident that took place today at Clyde C. Miller Career Academy and has engaged with the District's Office of Safety and Security, as well as the SLMPD, to investigate. No further information is available while an investigation is being conducted.

The KSDK story doesn't have a ton of details, but it does say that, according to some students, the security officer "only sprayed because he slipped as he attempted to break up the food fight." The reporter says the officer may have been mad about tripping and then pulled out the pepper spray in response.

Additionally, students might have been treated for pepper spray in their eyes and mouth, according to the news segment.

And the pepper spray allegedly did break up the fight, which, KSDK says, "wasn't a real fight, just a friendly one since school ends this Thursday," according to some accounts.

Here's the full segment. We'll update if we hear more from SLPS.