Compared to many other states in the country, Missouri has a high concentration of racist, homophobic tweets that include offensive, hateful language. And the tweeters are located all over the state.

So says a neat new interactive map called the Geography of Hate, which analyzes geocoded tweets that use the N-word, "fag," "homo" and other "hate words" from June of last year through April of 2013.

In some categories, Missouri appears to be one of the worst in the country. Hooray!

The map comes from an academic project of California's Humboldt State University, where researcher Monica Stephens cataloged all the hateful tweets in the country over the last year, within certain parameters. The map only includes tweets that human researchers read and confirmed to be explicitly negative.

"We think that 150,000 is a sufficiently large number to be quite depressed about the state of bigotry in our country," the researcher writes in an explanation of the methodology.

The research was limited by tweets that include location geocodes.

First, let's take a look at where Missouri falls on the map.

Here are all the racist tweets in the country: 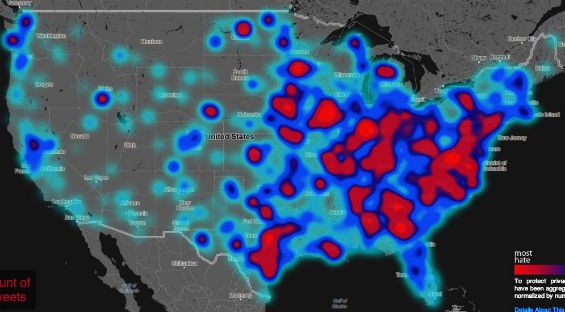 Homophobic tweets in the country:

And FYI, the scale here:

As you can see, Missouri's got a lot of red.

And this is not the first time researchers have called out Missouri for having a high concentration of derogatory tweets relative to other states.

A map of racist tweets after the presidential election last year showed that Missouri joined the ranks with some Southern states in being one of the worst. Researchers than said that Mississippi and Alabama had the highest scores, and Georgia, Louisiana and Tennessee followed behind. Behind that group was North Dakota, Utah and Missouri.

Here's that map showing the spike in hate-tweets in response to Barack Obama's reelection, with Missouri near the top.

But where in Missouri are these hateful tweets most prevalent?

Continue for more maps showing Missouri regions with the most racist and homophobic tweets -- and which offensive words they use most often.

And a close-up of Missouri's racist tweets.

As you can see, there appear to be pockets of racist and homophobic tweets, which are spread across different regions of the state.

In the St. Louis metro area, the highest concentration appears near Alton, Illinois, and St. Charles in the racism category. It looks like there's some activity around Webster Groves as well:

In the same region, there appears to be fewer homophobic tweets, but some are concentrated near O'Fallon and south of De Soto.

What words are used most often?

The Geography of Hate map lets users view a wide range of words, including the N-word, "fag," "homo" and more.

Here's Missouri's use of the N-word (which is by far the racist term that's used most often in the state):

For some perspective, Missouri's use of the N-word in context of surrounding states:

(H/t to our sister paper Westword for alerting us to this map.)