St. Peters Police: Nude Man Fondles Himself in Front of Library, Asks Girl If She Wants a Ride 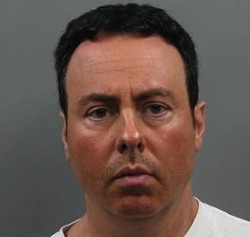 A naked man sitting in his car outside a library in St. Peters this week asked a teenage girl if she wanted a ride while he fondled himself.

That is according to St. Peters police officials who yesterday arrested Kevin Flatley, 49, two days after he allegedly decided it would be a good idea to sit nude in his car and talk to passersby in the parking lot of a library on Spencer Road.

After an investigation involving surveillance footage at the library and testimony from the victim, police located Flatley at his house and took him into custody, officials say.

Detectives noticed a tattoo of a flag on his arm, which matched the description given by the victim.

A witness who reportedly observed Flatley talking to the teenage girl at the library Tuesday afternoon called police. And when the girl got home, she called police as well.

St. Peters, 05/17/13: The St. Peters Police Department has arrested a male subject believed to be the male responsible in the indecent exposure which occurred on May 14th, 2013. The male has been identified as:

Kevin Flatley was arrested at his residence on Thursday May 16th approximately 12:00 PM after our Criminal Investigations Detectives were able to track down the suspect vehicle through various police databases.

Once detectives arrived at the residence, the vehicle was immediately located and the suspect, matching the description provided by the victim, was taken into custody. Detectives did locate a tattoo of an Italian Flag, which is very similar to the Irish Flag, on his upper arm just as the victim described. The vehicle had unique characteristics which were verified through the surveillance footage on the Spencer Library parking lot.