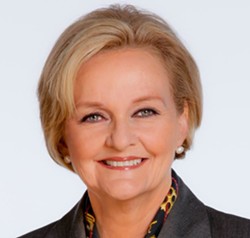 One of the biggest national news stories of the week centers on revelations that the Internal Revenue Service targeted conservative groups -- scrutinizing organizations with the words "tea party" and "patriot" in their names, for example. And the reports say that the tax agency's focus on conservative organizations may have been broader than that.

Now, the IRS is facing some harsh criticism from a perhaps unlikely place. Claire McCaskill, Democratic U.S. Senator from Missouri, just sent off a statement calling for firings in the wake of this IRS controversy.

"People should be fired for this serious breach of public trust," she says in the short statement. "We don't do this in America."

Her statement comes in response to reports that the IRS specifically scrutinized conservative and small-government groups applying for tax-exempt status, her office says in a news release.

When asked about it further today, she said:

Someone should be fired, and it should not just be some line employee. Anyone who was in a position of responsibility that knew this very un-American activity was going on should be fired.

She told reporters it is "an offense to what we are as a country."

The president has since promised to hold the IRS accountable and has called the targeting "outrageous."

Here's the full news release from the McCaskill's office.

"People should be fired for this serious breach of public trust. We don't do this in America."

Several news outlets have reported that a report by the Treasury Inspector General for Tax Administration due out this week will show that an IRS campaign to apply additional scrutiny to conservative groups targeted organizations with titles including "Tea Party" and "patriot," as well as groups focused on government spending.