Show-Me Cannabis, Missouri's marijuana reform advocacy group, has been spreading the word across the state about the need for more sensible pot policies -- and eventually hopes to push for legalization. Next week, the group was supposed to run a booth at Pointfest, 105.7 the Point's annual festival, but yesterday announced that Verizon Wireless Amphitheater had rejected its application.

Why? The managers reportedly were worried about having marijuana advocacy take place at their venue.

"People are just afraid of this issue a lot of the time," John Payne, Show-Me Cannabis executive director, tells Daily RFT. "It perpetuates this fear that people have.... And then no one talks about it and it gets worse."

And Payne says this is not the first time the group has been shut down by a company afraid of even giving marijuana activists a platform.

Representatives from Verizon Wireless Amphitheater did not respond to Daily RFT's requests for comment yesterday afternoon or this morning.

According to Payne, Show-Me Cannabis has been coordinating with the Point and was planning on manning a booth at the event and had even sent in a payment (which has since been refunded). The group would've been handing out literature, explaining their cause to attendees and selling wristbands and t-shirts. 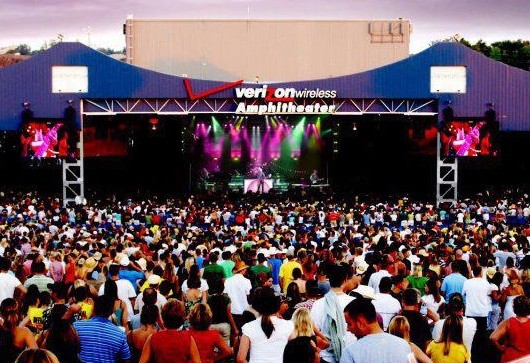 He was soon told, however, that the amphitheater had rejected his vendor application. He was finally able to talk to Verizon Wireless General Manager D.J. Lindfors, who, Payne says, told him that "he was concerned that allowing a booth advocating marijuana legalization would strain the amphitheater's relationship with the city and its police force, many of whom the venue employs as part time security."

After an initial phone conversation, Lindfors called again to confirm that "even after further consideration, the amphitheater was sticking with its decision to exclude Show-Me Cannabis from Pointfest."

Initially, Payne had heard that there may have been concerns about local police shutting the group down, but, just to be sure, he says he spoke with Maryland Heights police officials, who assured him that they would not stop the group.

Show-Me Cannabis, the police officials reportedly told him, has a First Amendment right to speak out.

Continue for more of our interview with Show-Me Cannabis and the group's full announcement.

And as a side note, though the group hopes to eventually spearhead a legalization campaign in Missouri, for now, it has been focused on decriminalization efforts to reduce the punishments for low-level possession charges.

Payne tells us that he tried to reason with the manager, but that he just seemed too worried about Show-Me Cannabis harming the venue's reputation and relationships in some way.

The festival has a good audience for his cause, Payne laments, noting that Show-Me Cannabis has been running ads with the Point.

"We know that the people that listen to the station are interested in our message," he says.

Last month, we wrote about a St. Louis radio station that refused to run Show-Me Cannabis ads, also reportedly due to a fear of furthering a discussion on pot.

"This is not an isolated incident," he says. "People are afraid to touch this issue."

SAINT LOUIS, MISSOURI - 05/09/2013 - On Monday, a representative from The Point (KPNT 105.7 FM) contacted Show-Me Cannabis to tell the public advocacy group that Verizon Wireless Amphitheater had refused their vendor application for Pointfest on May 12. Since then, Show-Me Cannabis has been working to resolve the issue with the venue but to no avail.

The initial reason offered for the rejection of Show-Me Cannabis' vendor registration was that the venue's management believed the Maryland Heights Police Department would shut the booth down for advocating illegal activity. Calls from both Show-Me Cannabis and The Point to Verizon Wireless Amphitheater seeking clarification were not returned on either Monday or Tuesday.

On Wednesday, John Payne of Show-Me Cannabis called the Maryland Heights Police Department and spoke to Chief of Police, Colonel William Carson. Carson told Payne that, to his knowledge, no one from the amphitheater had contacted his department about the question. Carson also acknowledged that Show-Me Cannabis has a First Amendment right to advocate for reforms to Missouri's marijuana laws.

After this information was relayed to Verizon Wireless Amphitheater, General Manager D.J. Lindfors called Payne Wednesday afternoon. Lindfors stated that he was not worried that the police would shut the booth down, but he was concerned that allowing a booth advocating marijuana legalization would strain the amphitheater's relationship with the city and its police force, many of whom the venue employs as part time security. Lindfors called Payne again on Thursday to confirm that, even after further consideration, the amphitheater was sticking with its decision to exclude Show-Me Cannabis from Pointfest.

"This situation demonstrates the extent to which our prohibitionist cannabis policies stifle free speech," Payne said. "I think Verizon Wireless Amphitheater's fears are mostly unjustified. However, the mere fact that a major corporation is afraid to even allow a discussion about marijuana policy on its premises for fear of both government and social persecution speaks volumes."

This is not the first time Show-Me Cannabis has been refused access because of its political positions. In October of 2012, the Oakville Elks Lodge returned a deposit from Show-Me Cannabis to rent the lodge's hall for a trivia night fundraiser. Then in March, The Arch (WARH 106.5 FM) refused to run Show-Me Cannabis' radio advertisements for fear of sparking controversy.

Despite these setbacks, Payne remains optimistic. "Marijuana prohibition is such an obviously failed policy that the only way it can survive is for its proponents to completely shut down discussion of the subject. That tactic has worked for many years, and it appears fear of an open debate will keep us out of Pointfest. But there are more individuals, organizations, and media outlets that want to engage this issue now than ever before. The truth will out, eventually."

Show-Me Cannabis Regulation is an association of organizations and individuals, who believe that cannabis prohibition is a failed policy, and regulating and taxing cannabis in a manner similar to alcohol would better control the production, distribution, and consumption of cannabis than the current criminal market system does. The group seeks to engage Missourians in a serious, public discussion about the issues associated with marijuana consumption, including medical cannabis, industrial hemp, public safety, and financial analysis in order to address problems associated with the current, failed policy.