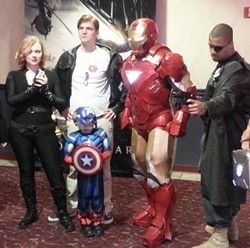 The Goodrich Capital 8 Theaters in Jefferson City is facing a lot of backlash this week over an Iron Man 3 event featuring men in fake tactical gear and some with toy guns. Management says it was all part of a fun event involving local comic book fans -- and that the whole incident is being blown way out of proportion.

"There was no incident," Goodrich Capital 8 Theaters Manager Bob Wilkins tells Daily RFT. "This is one guy going into the middle of the lobby and screaming about a gun. He has caused more issues than anyone with a toy gun could.... There was no scenario that could have possibly been misconstrued for dangerous at all except for this one random overreacting guy.... It was a clear, plastic toy gun."

Police and some frightened moviegoers, however, tell a different story.

"This is in no way, shape or form funny," Jefferson City Police Captain Doug Shoemaker tells Daily RFT. "We are all a little sensitive to the idea of someone walking into a movie theater with a fake gun or a real gun."

The heated criticism -- and now intense media attention -- is in part due to the horrific mass shooting in Aurora, Colorado last year, in which a gunman entered a theater and killed twelve people and injured dozens more with an assault rifle -- during the midnight premier of a superhero movie.

Wilkins' version of the story is that one man with a black shirt and pants and a plastic toy gun -- based on a rifle and with an orange tip -- entered the theater and was clearly part of the planned weekend events coordinated with a local comic group called Cosplacon.

"They've been here for every superhero movie, every zombie movie," Wilkins says. "They dress up in random costumes.... It's just a bunch of kids getting together."

Wilkins claims that this one individual caused a moviegoer to be extremely concerned and scream about an armed man -- and call 911.

And Shoemaker says police did receive one 911 call in the incident last weekend and says the caller reported that there were three people in tactical gear, carrying rifles.

"It ended up causing some concern," he says.

Once it was investigated, it was clear that there was no threat and Wilkins says that the theater even had a Jefferson City uniformed officer in the building the whole time.

Wilkins confirms that there were other attendees that were wearing fake tactical gear with fake firearms -- but argues that they weren't the ones that scared the moviegoer, even if police did locate them when they arrived.

Wilkins says the theater also had a man in an Iron Man suit on scene and that the one guy who the moviegoer spotted was with the man in the costume.

Wilkins says that thousands of people passed through the theater over the weekend and that "the one person that said anything is the only one that had an issue."

A local Jefferson City station has an account from an Army war veteran who says he suffers from post-traumatic stress disorder and was very frightened by the "publicity stunt." Now, he's more upset that the theater is not apologizing.

There were no arrests and no laws were broken, police say.

"Our working relationship with the theater has been very good," he says, but adds that after this incident, "We had a discussion with theater management."