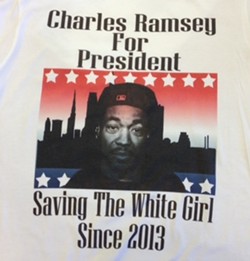 St. Louis' Baked T's store has jumped on the Internet hysteria around Charles Ramsey, the Cleveland hero who helped rescue three women who had reportedly been held captive for more than a decade.

Ramsey gave a now viral interview with local media, during which he said, "I knew something was wrong when a little, pretty white girl ran into a black man's arms."

Which brings us to Baked T's in the Delmar Loop, which designed this t-shirt and yesterday displayed it in the store window. More photos below.

Here's Drew Raskas, a senior graphic designer at Baked T's, holding up the product he designed:

The store's t-shirts inspired by the viral "Ain't nobody got time for that" interview -- from a woman who escaped a fire -- did really well, Raskas says.

And this is a similar theme.

"It's the concept of a lighter thing in a darker moment," he says.

He says he and his coworkers tossed around the idea of referencing Ramsey's "big testicles" quote, but thought "Charles Ramsey For President" might be...a little more appropriate.

Apropos of Nothing Photos