Missouri Seersucker Caucus Is Most Powerful, Bipartisan Force At The Capitol (PHOTOS) 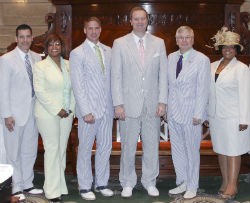 Last month, we reported on Missouri State Senator Ryan McKenna's handwritten proposal to ban seersucker suits for anyone over the age of eight.

His disdain for the fashion trend -- inspired by a growing love of seersucker at the Missouri State Capitol -- has apparently backfired. Big time. The so-called seersucker caucus is stronger than ever. And in an increasingly hostile and divided legislature, this may be one of the most powerful, bipartisan group of lawmakers.

Republican Senator Eric Schmitt, a champion of the seersucker cause, sent Daily RFT this photo today. 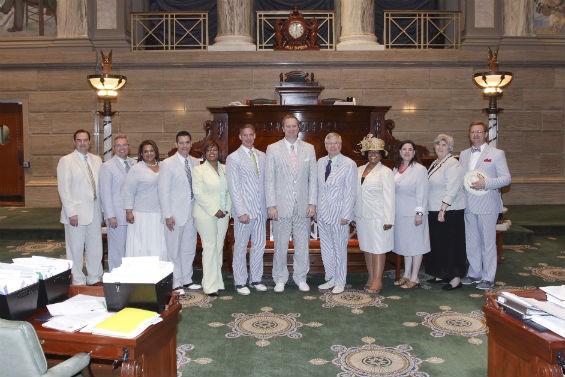 And that hat, up close:

That's right, ladies and gentlemen: Your powerful Democrat and Republicans lawmakers can truly unite around a common goal!

The trend has apparently taken over the Twitterverse of the capitol, too.

Apparently tomorrow will be seersucker-to-end-all-seersucker day in the Mo. Senate. The Seersucker Caucus is having its pix taken.

. @jamnasheed mentioned earlier today that next year she plans to push to make seersucker the official fabric of Missouri #moleg

Ongoing Senate discussion on seersucker right now. Not sure why, but it's what we've been doing for about 5 minutes now. #moleg

In which seersucker Wednesday gets really weird. RT @ssnich: "The senate has Kool Aid." progmo.us/ZYvdEe #moleg

Memorial Day is in 20 days, the forecast is 82 degrees but #MoLeg reporters saying Wednesday is #Seersucker Day in the #Missouri Senate.

The Senate seersucker caucus has seized control of the chamber. They are drunk w/power #moleg

Here is the Missouri #seersucker caucus in all its glory and power: @ Missouri Capitol Building instagram.com/p/ZDvrmBHmRN/

While I choose not to wear seersucker on Wed, I stand in solidarity w/ my fellow Senators who do. #seersuckercaucus twitter.com/RyanSilvey/sta...

The rising tide of the seersucker: Our Missouri Senate seersucker caucus is gaining national attention. esquire.com/_mobile/blogs/...

The craze appears to have even inspired McKenna, the lead opponent of seersucker, to join Twitter:

#seersuckercaucus My first tweet ever to prove my point.My 3 yr old and an adult Senator. twitter.com/EmceeKenna22/s...

Next week will be the last Seersucker Wednesday of the session. Not sure how the seersucker trend could get more intense, but these dedicated lawmakers will surely find a way.