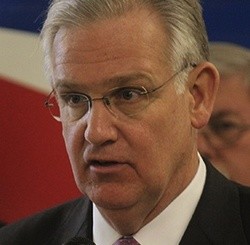 It's the final countdown of the legislative session and Missouri lawmakers were quite productive last night -- giving final approvals to three controversial GOP-backed bills that liberal critics say are an embarrassment to the state.

To some watching the debates unfold -- and to the minority Democrats frustrated with the priorities of the legislative leaders -- it's a different story. One blocks Sharia law, the religious law of Islam. Another bans a 1992 international green pledge of the United Nations. And the third stops federal gun control policies from being enforced in Missouri.

And in some cases, lawmakers may be able to override a veto of Governor Jay Nixon, a Democrat.

U.S. Senator Claire McCaskill, a Democrat, summed it up this way:

Just told that Mo House passed bills tonight against Sharia law,Agenda 21,&forbidding the enforcement of federal law in our state.Huh??

Here's Senator Brian Nieves -- who recently got national attention for a non-legislative reasons -- applauding the passage of the proposals last night:

We've written about versions of all three proposals over the last few months.

As a recap, Nieves' so-called "civil liberties" bill closely mirrors other ani-Muslim efforts across the country against Sharia law. The argument is that this religious law is somehow a threat to American freedom and on paper, the bill blocks the government from applying this foreign law onto Missouri citizens. (This one is SB 267, which passed in the House by a vote of 109-41).

The second bill that Nixon will have to consider is what's commonly referred to as the anti-Agenda 21 bill, aimed at prohibiting the government from enforcing a non-binding policy pledge orchestrated by the United Nations in 1992 around sustainable development. It was signed by George H. W. Bush. The concern here from Republican supporters is that government may try to infringe on private citizens' property rights in the name of green projects. (This one is SB 265, which passed the House by a vote of 118-37).

Opponents have slammed it as a paranoid, delusional waste of time and often chastise these supporters as the "tinfoil hat" brigade, which apparently led to some colorful interactions last night:

Rep. Frame gets a reprimand from the Speaker for donning a tin foil hat on the floor of the House. #moleg

Finally, the third bill is the Second Amendment Preservation Act, which "rejects all federal acts that infringe on a Missouri citizens' rights under the Second Amendment of the United States Constitution." Critics say that this is an illegal attempt at nullification and that Missouri can't simply override federal policy, but pro-gun supports at the Capitol argue that just because Barack Obama says something is constitutional doesn't make it so. (This one is HB 436, which passed by a vote of 116-38).

Continue for more commentary on the bills and for full copies of the legislation.

While you were sleeping we sent the MO Gov gun nullification, Sharia Law and Agenda 21 bills.Aren't you proud of us?#Not

Late last nt we proved the NRA and the anti-Muslim zealots are mightier than the anti-teacher Students First. Proud of MO?#moleg.

Sen @briannieves: "Tonight (Wed) was an historic night for Missouri and her citizens! progmo.us/12fHZOS #moleg twitter.com/ssnich/status/...

Here are the three bills: