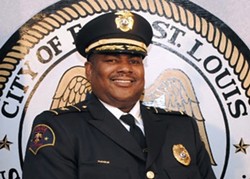 The Federal Bureau of Investigation has taken an East St. Louis police detective into custody -- and the chief of the department says it was a complete surprise to him and his colleagues.

"I am dumbfounded," East St. Louis' police chief Michael Floore tells Daily RFT this morning. "I'm upset about it. He was one of our top detectives."

The detective in question is Orlando Ward, who Floore says has been with the department since 2001. An FBI spokesman tells us that he was taken into custody but has no additional comment beyond that, and he can't offer any details on the nature of the investigation or whether Ward is even still in custody now.

Floore says he is in the dark, too.

"We're praying for his family that whatever it is, it works itself out," Floore tells us. "We are just praying."

Floore says he has absolutely no idea what this investigation could be about, but that this kind of event is very difficult for him and his team.

This is not the first time the FBI has investigated the department.

"It's shattering to rebuild," Floore says, "when you're constantly getting torn down."

He says of Ward, "He was always a standup guy...a great detective, very hard-working. All around a great guy. All of this is a shock to me."

Floore says that Ward has three children, a wife and an elderly mother -- and that he hopes this gets resolved smoothly.

Here's KSDK (Channel 5)'s interview with the mayor of East St. Louis, who also praises the detective in question.