Lawrence Biondi's Retirement Speech at SLU Gala: "It Is Time For Me to Move On" (VIDEO) 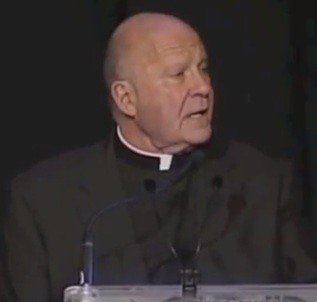 It is time for Lawrence Biondi to move on.

So said Saint Louis University's president Father Lawrence Biondi in his announcement that he will be stepping down as head of the school -- a move that surprised many and sent reporters scrambling for details Saturday night. He broke the news at a private 25th anniversary gala over the weekend, and shortly after, rumors started to spread on Twitter about the embattled president's retirement. SLU officials sent out a statement saying the university will be searching for Biondi's successor in the fall.

Now, SLU has released footage of his much discussed speech. Watch his remarks below.

He drops the bombshell news starting at around the 13:50 mark.

His comments regarding the decision to step down as president are fairly short and somber.

"The transformation of Saint Louis University has truly been a team effort," he said. "And just as I helped lead SLU's transformation when I arrived here more than 25 years ago, I now know it is time for the next transformation to begin."

He continued, "I have decided to make a transition -- a transition in leadership for Saint Louis University. It is time for me to move on to the next phase of my own life."

This fall, the board will launch a search for his successor, he told the crowd of more than 800 people.

"I promise you that I will do everything that I can to make this transition to our next president as smooth as possible," he added. "But as I approach my 75th birthday, I know I am ready for new challenges, challenges that include hearing and listening carefully to the call of our General Superior in Rome...."

"Please know that I will never lose my love for SLU. This university is as much a part of me as my love for my Biondi clan, my friends, and of course, Italian food and Italian art. And I love what all of us have accomplished here together. When I look around this arena, I see many, many trusted friends.... I want to thank you. Thank you for your friendship and support. I cannot begin to tell you how important it has been to me knowing that I have so many of you to lean on."

The announcement comes after months of protest following last year's no-confidence vote from an overwhelming majority of faculty members.

Continue for the university's full announcement.

Below is the late-night press release from SLU.

ST. LOUIS -- On Saturday, May 4, Saint Louis University President Lawrence Biondi, S.J., told the University's Board of Trustees of his intention to retire from his position and to work with the Board on the search process for a new president, which will begin in the fall.

At a gala Saturday night celebrating his 25 years of leadership, Father Biondi announced his intentions to a crowd of more than 800 alumni, supporters and community leaders. The event in Chaifetz Arena received approximately $1.4 million in gifts and sponsorships for student scholarships and academic initiatives.

"Just as I helped lead SLU's transformation when I arrived here more than 25 years ago, I know it is now time for the next transformation to begin," Father Biondi said. "And, so, with the blessing of our Board of Trustees, I have decided it is time for a transition in leadership for Saint Louis University -- time for me to move on to the next phase of my life. This fall, the Board will launch a search for my successor. I will be here as long as they need me, and will do everything I can to make the transition to our next president as smooth as possible."

Father Biondi continued: "As I approach my 75th birthday, I know I am ready for new challenges -- challenges that might include heeding the call of our General Superior in Rome, Father Nicolas, who has asked Jesuits around the world to focus on care for the poor, the marginalized, the uneducated and immigrants. Right now, I remain open to how God is calling me to serve others in ways, yet to be discerned."

At its meeting Saturday morning, the Saint Louis University Board of Trustees elected J. Joe Adorjan to serve as chairman of the SLU Board. Adorjan succeeds Thomas H. Brouster, Sr., who in April announced his plans to step down as chairman. The Board also elected trustee Patrick J. Sly as vice chairman.

Adorjan has been a trustee at Saint Louis University for 25 years. He has served two previous terms as Board chairman (1991-1997 and 1999- 2005) and most recently served on the Board's Executive Committee and chaired the Clinical Affairs Committee. Adorjan is a two-time graduate of SLU, having received his bachelor's and master's degrees in economics from the University. He is the chairman of Adven Capital Partners in Clayton, Mo.

Sly joined the SLU Board of Trustees in 2003, and is currently a member of the Board's Executive Committee and chair of the Academic Affairs Committee of the Board. Also a SLU graduate, Sly received his MBA from the University. He is the executive vice president of Emerson and business leader of Emerson Commercial & Residential Solutions. He also oversees the Emerson Charitable Trust, as well as the company's community giving activities.

Adorjan said Saturday that he was honored to have been elected to the position of Board chairman by his fellow trustees.

"I am committed to working with Father Biondi and all University stakeholders to continue to advance this great institution," Adorjan said. "With Pat Sly as vice chairman, I am very confident that we have a strong leadership team in place to advise Father Biondi and the Board of Trustees as we move forward."

Details about transition plans and search processes will be communicated to the University community in the weeks ahead. Neither the University nor the Board of Trustees will have additional comment at this time.

Saint Louis University President Lawrence Biondi, S.J., has led SLU through a remarkable era of progress and achievement since his inauguration in 1987. He is one of the longest serving presidents at an American Jesuit college or university.

During his tenure, he has focused on recruiting the finest faculty and students, increasing the University's academic standards and achievements, and developing the University as a major research center.

Highlights of Father Biondi's tenure include: -The successful completion of fundraising and capital campaigns totaling more than $785 million.

-The investment of an estimated $850 million in improvements, enhancements and expansions.

-An increase in the size of SLU's Midtown campus from 113 acres with 62 buildings to 268 acres with 131 buildings.

-Construction of the $82 million on-campus Chaifetz Arena in 2008. The 10,600-seat, multipurpose facility has dramatically enhanced the student experience and is home to SLU's basketball teams.

-Completion of the Scott Law Center in downtown St. Louis, the Center for Global Citizenship, the Health Sciences Education Union, Medical Center Stadium, Hotel Ignacio, John and Lucy Cook Hall, McDonnell Douglas Hall, Doisy College of Health Sciences and the Center for Advanced Dental Education, the Henry Lay Center for Arts and Education in Louisiana, Mo., as well as the renovation and expansion of Busch Student Center, among many other projects.

-Classification of SLU as a research institution by the Carnegie Foundation.

-An increase in the number of endowed chairs and professorships at the University from 16 to 65, drawing and retaining the nation's leading professors in their respective fields.

-The decrease of the student-faculty ratio to 12-to-1 and reduction of the average class size to 24.4 students.

-The establishment of new academic, service, leadership and diversity scholarships. In 2012, SLU provided a record $339 million in aid to students.

-Recognition as a character-building college by The Templeton Guide: Colleges That Encourage Character Development.

-The establishment of the Center for World Health and Medicine, an innovative initiative dedicated to addressing critical health concerns in developing nations.

-The launch of the first Center for Sustainability at a Jesuit university.

-The expansion and enhancement of Saint Louis University's Madrid campus as the first foreign university to be recognized officially by Spain's Ministry of Higher Education.