Missouri Lobbyists Will Work for Booze? The "Liquor Wars" at the Legislature Intensify

One of the more intense fights at the Missouri legislature in the final weeks of the session centers on a proposal to reform government regulation of the alcohol industry; it's controversial enough that some lobbyists and lawmakers in Jefferson City now refer to it as the "liquor wars."

Critics say the legislation on the table would make it harder for suppliers to terminate their relationships with distributors -- with some small distillers opposing, arguing it could hurt their business and that it unfairly interferes with the free market.

How, then, can the two work together? Payments of booze -- sort of.

Last week, Daily RFT was forwarded an e-mail written by Ralph Haynes, one of the owners of Pinckney Bend Distillery, sent to other companies, explaining the fight at the Missouri Capitol and his recent conversation with Richard McIntosh, a lobbyist who he is going to be working with.

The e-mail was sent to us by way of someone who supports the legislation (that is, a source on the opposite side of the lobbying firm). At the least, the e-mail offers a peek behind the curtain at the lobbying efforts in this legislative battle, which is known as one of the most lobbied issues of the session. 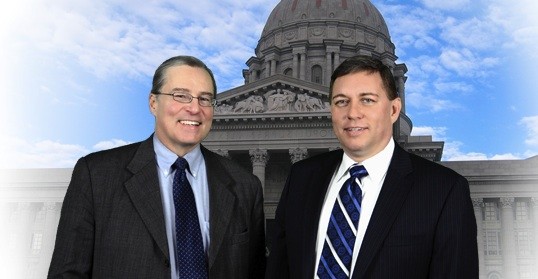 Haynes writes of the lobbyists (emphasis ours): "They want to represent us craft distillers in this fight, and they will work for product. No money need change hands."

So...the firm will help the business out in exchange for booze?

McIntosh and his partner, Franc Flotron, explain to Daily RFT that it's important that his firm help represent the smaller distillers, whose voices are being drowned out in this fight -- and that they deserve to be heard, even if they can't afford to get help from well-paid lobbyists.

Some that support the bill "have the means of being able to go to our state capitol...and employ lobbyists and put together sophisticated campaigns," Flotron says. Others, like Pinckney, are "brand-new start-up fledgling businesses.... Now, all of a sudden, he has some major concern that his business plan isn't going to be able to operate.... We think that is an important part of the message that needs to be delivered.... These guys are probably the most vulnerable, because they are the newest."

And because a place like Pinckney can't afford lobbyists, Flotron & McIntosh will basically help them out for free, they say, and in exchange, perhaps get a few samples -- partly, because it's important that they know more about the company they are advocating for. (And they point out that they would report any financial relationship as required by disclosure laws; they have not yet exchanged anything and only have had initial talks.)

"It's hard to lobby what you don't know," McIntosh says. "When legislators say, 'Richard, what do they make? What does it taste like?' You can say, 'Yes we've had it. Come over to the office, and do a little sampling.'"

The Missouri Times has a fairly comprehensive piece on the "liquor wars," and check out this Post-Dispatch story as well on the related legal battles.

Notwithstanding the terms, provisions and conditions of any franchise, no supplier shall unilaterally terminate or refuse to continue or change substantially the condition of any franchise with the wholesaler unless the supplier has first established good cause for such termination, noncontinuance or change.

"What the legislation would do would be make it very, very difficult for a producer to be able to change distributors," Flotron says. "When you start a new business, what you need today may be different from what you need tomorrow."

For his part, Haynes tells us that he's concerned about the impact of the legislation -- and does not have the resources like some of the supporters of the bill to get involved in the political fight.

"Why do we need another layer of control and intervention in what is otherwise a relatively free market?" says Haynes, 63, one of the owners of Pinckney Bend Distillery, which makes gins, vodkas and whiskey. "What it does is it limits our choice.... We become chained to our distributor and cannot get out of it in any realistic way."

Continue for more commentary on the legislation and the full draft bill.

Haynes adds, "My voice is a very small voice. And we don't have the resources to pay lobbyists.... What is it we have?"

The company started in 2011 and is growing successfully, but at this point, he says, "We can't even pay ourselves."

That's why, Haynes says, he was pleased to get some advice from the lobbying firm and, with the help of McIntosh, will be going to the legislature this week to meet with lawmakers and explain his stance.

Here's a full draft version of the bill.

And here's part of the e-mail from Haynes, which was forwarded to Daily RFT.

I had a long conversation with Richard McIntosh of the lobbying firm Flotron & Macintosh. They represent the big players lined up against this legislation.... They have also represented the Missouri wine industry in the past. A summery of our conversation is as follows:

1. They know their way around Jeff City, and this issue in particular. They led the fight that defeated it last year.

2. They want to represent us craft distillers in this fight, and they will work for product. No money need change hands.

3. They will help us direct our efforts in order to be most effective, beginning today.

4. We should waste no time in organizing for action.

5. The outcome of this business is far from decided, and we should make no 'cut out' deals in exchange for our freedom.

The unanimous vote at Saturday's meeting was that we were against this legislation. Pinckney Bend will accept and follow the advise and guidance of Flotron & McIntosh in fighting this legislation, and contribute product to the effort. If you are on board with this arrangement, let me know and I will keep you in the loop.

1. HB 759/ SB 365 serves the financial interests of one large liquor distributor (Major Brands) at the expense of hundreds of small Missouri wineries, breweries, distilleries, distributorships, their employees and families.

2. HB 759/ SB 365 adds yet another level of government regulation to an industry that is already heavily regulated. This legislation is unanimously opposed by Missouri's craft distilling community.

3. HB 759 / SB 365 proposes using the power of the State to intervene in what is now a free market, impede free trade and effectively lock small producers into representation with no reasonable means of escape, regardless of distributor performance.