Last week, 114 barges in St. Louis broke free into the Mississippi River -- 11 of which sank. At about the same time, local officials were also dealing with a treatment plant failure that resulted in untreated sewage flowing into the river at a high rate.

Now, there has been an oil spill.

Late last night, the Coast Guard says, approximately 300 gallons of crude oil were unloaded into the river after a vessel struck a fleeting area near Alton, Illinois -- causing fourteen barges to break away.

"We have found no environmental impact, but we will continue to monitor the situation and conduct harbor patrols," Lt. Colin Fogarty of the U.S. Coast Guard tells Daily RFT.

The official news alert on the spill says that at 12:57 a.m. a vessel hit a fleeting area, which prompted the barge breakaway as well as the escape of two dry docks -- and more.

The barges then hit numerous other facilities, dry docks and another barge, ultimately leading to the 300-gallon spill. 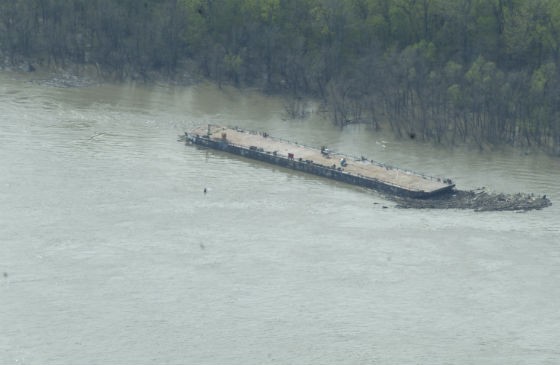 "We haven't had any proof of the environment being affected in any way," Fogarty tells us, later adding, "The Mississippi River just has so much water flowing through it now."

Initially, officials closed the river "to allow for safe and effective clean up and salvage operations," the Coast Guard news release says.

Currently, the breakaway barges, flats and dry docks have been accounted for and secured, officials say and Coast Guard forces are on the scene doing inspections of the facilities and barges. They are also conducting a shoreline assessment to evaluate any environmental damage.

The closed section of the river was reopened at 2:13 a.m. There were no injuries or deaths reported in the incident.

"The Coast Guard is assessing the situation," Captain Byron Black, commander of Coast Guard Sector Upper Mississippi River says in a statement. "Our primary concern is to ensure the safety of people, the environment, and the waterway, to that end, we have personnel on scene actively inspecting affected facilities and vessels and evaluating the River."