St. Louis Police: Man Beats Other Man With Mallet Over the "Whereabouts of a Lighter" 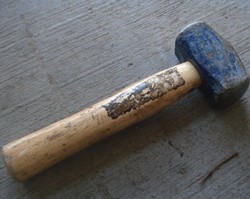 What is it with hammer fights in St. Louis? And violent disputes related to cigarettes?

Last month, we reported on an argument about a cigarette in which one man allegedly smashed a glass plate over another man's head. That same week, in a separate incident, an apparently angry handyman was accused of beating someone he had done work for...by hitting him with a hammer.

And today, ladies and gentlemen, we give you the story of a confrontation last night on the 4900 block of Arlington Avenue that seems to combine those two bizarre crime incidents. Police say one man knocked out another man...with a metal mallet.

Why? The fight, the police report says, was about the "whereabouts of a light."

Police responded to a call of a 55-year-old man "lying motionless on the street" at around 7 p.m. last night.

They found him on the curb.

Officers later determined that the victim had been engaged in a fist fight with a 54-year-old man over the location of a light.

During the fight, apparently not satisfied with using fists, the 54-year-old man, who police haven't named, went to his car and retrieved a metal mallet, police say.

He then allegedly struck the other man in the head, reentered his car and fled.

After cops arrive, they canvassed the area, found the suspect and arrested him without incident. The mallet was found in the car.

The victim, meanwhile, was taken to the hospital, where cops say he is in critical, but stable condition.

Incident: Assault 1st Location: 4900 block of Arlington Date/Time: 05/01/13 @ 19:00 Victim: 55-year old black male Suspect: 54-year old black male Officers responded to an assault relative to the victim lying motionless on the street. Upon arrival, officers located the victim on the curb in front of the above address. It was later determined the victim was engaged in a fist fight with the suspect over the whereabouts of a lighter. During the fight, the suspect retrieved a metal mallet from his vehicle and used it to strike the victim in the head. The suspect then entered his vehicle and fled. After a canvass of the area, officers observed the suspect's vehicle and took him into custody without incident. The weapon was recovered from the vehicle. The victim was conveyed to a local hospital and listed in critical/stable condition. The investigation is ongoing.