As cycling advocates in St. Louis push to revive the Penrose Park velodrome, a new report says that Missouri on the whole is not a great place for cyclists -- in large part because the state lacks key bike-friendly policies and funding opportunities.

Missouri's score as 30th in the nation is the state's lowest ever from the League of American Bicyclists.

"It's disappointing," Brent Hugh, executive director of Missouri Bicycle and Pedestrian Federation, tells Daily RFT. "But honestly, 30th is probably about right. We are not anything close to the top ten states."

What could Missouri do to boost its score?

The report, full document below, offers a series of recommendations on how the state could become a better place for cyclists.

Missouri scored low in most key categories, including legislation and enforcement, evaluation and planning, and infrastructure and funding. 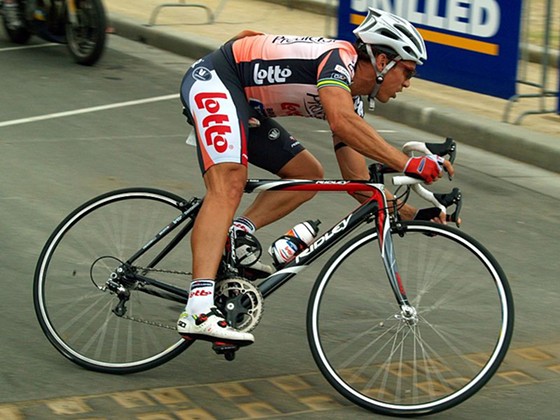 In the report's six-year history, the highest rank the state ever got was seventeen.

Hugh says he does expect the state to improve moving forward.

"We are kind of at the cusp right now," he says. "We can see the change coming, but we are not really seeing it out on the road much."

One of the biggest obstacles for bike planning, advocates say, is that there are strict restrictions on state transportation money that block public funding of bike infrastructure. A bill currently being debated at the legislature aims to change that and, as the report notes, that could make a big difference if successful.

Why did Missouri drop?

"Other states are improving," Hugh says, adding, "Missouri's challenge over the next several years...is to put bike lanes and bike routes down...and connect them so we have a bicycle system."

The report also recommends that Missouri:

-Adopt a safe passing law with a minimum distance of three feet or a "move over for cyclists" law similar to the existing "move over for emergency vehicles" legislation to address bicyclist safety.

-Adopt a vulnerable road user law that increases penalties for a motorist that injures or kills a bicyclist or pedestrian.

-Adopt an anti-harassment law that makes it unlawful to harass, taunt, or maliciously throw an object at or in the direction of any person riding a bicycle.

Hugh says he is optimistic. "A lot of the work has been setting us up for doing way better in the future."

Here's the full report on Missouri.

And a news release from the Missouri Bicycle and Pedestrian Federation:

Jefferson City - May 1, 2013 - In honor of National Bike Month, the League of American Bicyclists has released its latest Bicycle Friendly States ranking. In the sixth annual assessment, Missouri achieved a #30 ranking nationally, while placing #6 in the Midwest.

"We are encouraged to see significant progress in top states like Washington, Delaware, Colorado and Oregon," said Andy Clarke, president of the League of American Bicyclists. "But, as the scores clearly highlight, there's much work to be done in critical areas like infrastructure and planning in every state. "

The Bicycle Friendly States Ranking is now even more comprehensive, capturing more information than ever before and delving more deeply into the issues embedded in becoming a more bicycle friendly state.

Missouri's #30 ranking was based on a number of key indicators, including infrastructure and funding that provide on-the-ground bicycle facilities; education and encourage programs that promote cycling; and passage and enforcement of bicycle-friendly laws that make it safe and comfortable for people of all ages to ride.

"Most of the recommendations in the report can easily be adopted by cities, metro planning organizations, or statewide--and these are things that really improve our cities and neighborhoods for bicycling," said Missouri Bicycle and Pedestrian Federation Executive Director Brent Hugh.

The report's key recommendations for Missouri:

- Adopt statewide and local laws making it unlawful to harass, taunt, or throw objects at bicyclists

"We're seeing more people bicycling in Missouri than ever before," said Hugh. "And both cities and state agencies like MoDOT are gradually working to improve conditions for bicycling. But frankly, we've got to step up our game. Other states are improving faster than we are."

Missouri's ranking in previous years has ranged from 28th to 17th. The year's ranking of 30th is the lowest ranking Missouri has received in the six years of the Bicycle Friendly State program.

The Bicycle Friendly State program is more than an annual assessment. Throughout the year, League staff will work actively with state officials and advocacy leaders to help Missouri identify and implement the programs, policies and campaigns that will improve conditions for bicyclists.

Click here to see how Missouri ranked in the five evaluation categories. Learn more about the BFS program at www.bikeleague.org/states.

About the Bicycle Friendly America Program