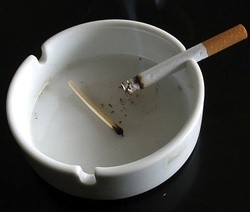 Is the city of St. Charles next?

In recent months, there has been a surge in proposals related to smoking bans at every level of government in Missouri from municipal ordinances to statewide efforts -- and now officials in St. Charles are soliciting feedback for a preliminary effort labeled the "Smoke-Free Air Act."

"This is a proactive opportunity for the city of St. Charles to explore this kind of legislation on our own as a city," Carol Felzien, director of communications for the city, tells Daily RFT. Starting next week, the city will be hosting a series of public hearings on potential local legislation -- and Felzien emphasizes that this is the first step in a long process.

Advocates that oppose sweeping bans, however, are already trying to organize businesses to come out and protest against any policy that they say could unfairly -- and selectively -- hurt some smoke-friendly restaurants and bars.

Bill Hannegan, a St. Louis resident and activist who keeps a close eye on local smoking proposals, this week sent off letters to 95 business owners in the city of St. Charles urging them to attend the hearings this month in regards to the smoke-free air act.

Hannegan generally opposes bans and argues that a policy that prohibits smoking for establishments that have patrons under the age of 21 is the only fair and uniform way to do it.

"We've been burned a bunch of times," he says of past smoking ban proposals that initially had exceptions in place for businesses, but ultimately became much stricter. "I'll believe the bars are getting exempted when they get exempted."

His letter says in part:

City of St. Charles bar/restaurant owner, the threat to your establishment from this smoking ban is real....

If the Council hears from the patrons, staff and ownership of your establishment at the hearings, and in phone calls and e-mails, this smoking ban can be beaten!

"I'm alerting bars to the worst case scenarios," he adds.

Felzien says that there is no set goal at this point and that Mayor Sally Faith and the St. Charles City Council simply want feedback at this time as they begin to consider legislation that would govern smoking within city limits.

"This is about fact gathering and getting input from the community, both residents and businesses," she says.

The city and the county of St. Charles both currently do not have any smoking ban or smoke-free policies on the books, though at the county level, it has been considered in the past. Meanwhile, Missouri state lawmakers have offered proposals in recent weeks that could impact cities like St. Charles.

Continue for more details on the policy under consideration in St. Charles.

"Our preference would be our own legislation versus being mandated by someone else whether at the county level or the state level," Felzien explains.

Part of the debate is likely to center around Ameristar Casino, which could be exempted through a smoke-free policy. Activists like Hannegan say that other bars and restaurants that want to be exempted should have the opportunity, too -- not just casinos.

Felzien notes that there are some restaurants and business owners that have on their own implemented no-smoking policies inside their establishments in the city.

But as per a citywide ordinance, "It's wide open...at this time," she says, adding of the local elected officials, "They want to hear from people.... It's an important topic."

Details on the hearings: