Spearheaded by the United Mine Workers of America, thousands of protesters flocked to St. Louis yesterday in a large rally against Peabody Energy and Arch Coal, which have been accused of orchestrating a complex scheme to deny health care benefits to unionized retirees.

"This is clearly growing," Phil Smith, communications director for UMWA, tells Daily RFT. "More and more of our members are coming...and we are getting support from other unions, the religious and civic community.... People see this is as not just a struggle for the coal miners involved. If they can do this to us, then who is next?"

Meanwhile, Peabody Energy, the corporation headquartered in St. Louis, was holdings its annual shareholder meeting in Gillette, Wyoming yesterday -- in an unprecedented move to escape activist protests, according to their critics. But even out of state, the company still felt the pressure from labor rights advocates. And there were still arrests.

"You can't just walk away from your moral obligation. You think you can, but you can't. And it's time to step up to the plate," Smith says of the companies.

In addition to the major demonstrations, the UMWA ran a full-page ad on A3 of the Post-Dispatch yesterday with big letters saying, "We come seeking justice," over a picture of graves and a sign that reads in all caps, "ARE YOU NEXT?" 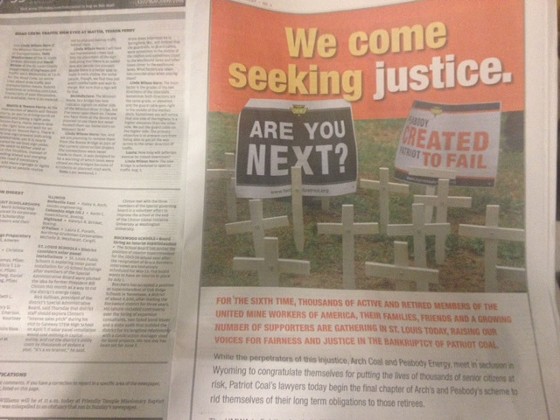 The print ad outlines the basic allegations of the union and their supporters: Arch Coal and Peabody Energy tried to escape their health care obligations to retirees by creating a company called Patriot Coal that was purposely designed to fail. The full-page spread says:

While the perpetrators of this injustice, Arch Coal and Peabody Energy, meet in seclusion in Wyoming to congratulate themselves for putting the lives of thousands of senior citizens at risk, Patriot Coal's lawyers today begin the final chapter of Arch's and Peabody's scheme to rid themselves of their long term obligations to those retirees.

The latter part of the statement refers to the ongoing legal dispute surrounding Patriot's filing for bankruptcy last year; Patriot, which has said it must cut annual employee obligations, has argued that Peabody, its former parent company, is liable. The workers, the union argues, are the ones who suffer. 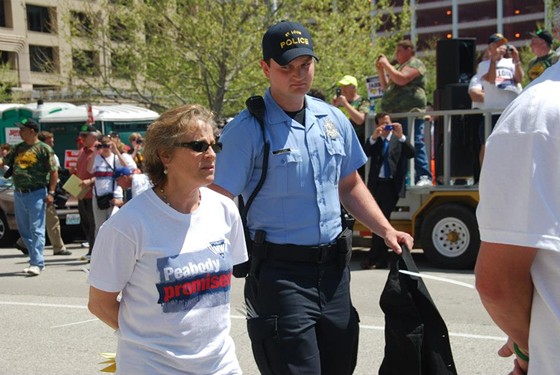 Patriot and Arch Coal did not respond to our requests for comment yesterday. a Peabody Energy spokesperson, however, offered us a lengthy response, pushing back against the union's allegations and arguing that the company has continued to meet all of its obligations.

The statement, full version on view below, says:

UMWA's claim that Patriot Coal was 'designed to fail' is a desperate attempt to rewrite history. Patriot was highly successful following its launch more than five years ago with significant assets, low debt levels and a market value that more than quadrupled in less than a year....

A series of other unforeseen events affecting all coal producers followed − all on Patriot's watch....

Peabody has lived up to its obligations and continues to do so. The UMWA is fully aware that this is a matter solely between the union and Patriot Coal, and the proper process for deciding such issues is through the bankruptcy court - not the court of public opinion.

Continue for more from yesterday's protests and for full statements.

A St. Louis Metro Police Department spokeswoman tells Daily RFT that a total of sixteen people were arrested for "failure to obey the reasonable direction of an officer."

It would appear that one of the protesters who faced retaliation from police was Van Jones, a well-known environmental advocate and former green jobs advisor to the President Barack Obama:

I'm out of jail & ready for next round. Peabody/Patriot Coal is messing with wrong folks!! FairnessAtPatriot.org. twitter.com/VanJones68/sta...

Smith declines to offer specifics on how much the union is spending on ads pressuring the companies, but says, "The scope is extensive. We want to make sure we are able to get our message out."

He continues, "It's a message that is universal to a certain extent.... Justice comes in many forms. First and foremost, it comes with the corporations deciding to do the right thing."

In Wyoming, activists from Missourians Organizing for Reform and Empowerment report that three people were arrested protesting at the shareholder meeting.

Continue for more photos and the full statements from Peabody Energy and MORE.

We can say that UMWA's claim that Patriot Coal was 'designed to fail' is a desperate attempt to rewrite history. Patriot was highly successful following its launch more than five years ago with significant assets, low debt levels and a market value that more than quadrupled in less than a year.

At the time, analysts cited a bright future for the company's based on its "strong balance sheet," "strong management team" and "excellent valuation prospects."

It is our understanding that when Patriot's market value was high, the company could have strengthened its financial position. Instead, Patriot made a major acquisition of Magnum Coal Company in mid-2008.

A series of other unforeseen events affecting all coal producers followed − all on Patriot's watch.

These included an unprecedented global financial crisis; development of low-cost shale gas that reduced coal use; burdensome regulation by the U.S. EPA that dramatically increased Patriot's environmental compliance costs; an increase in safety regulations that, in turn, increased operating costs; and a significant reduction in the price of Patriot's major product: metallurgical coal.

Peabody has lived up to its obligations and continues to do so. The UMWA is fully aware that this is a matter solely between the union and Patriot Coal, and the proper process for deciding such issues is through the bankruptcy court - not the court of public opinion.

GILLETTE, WY-- Peabody Energy shareholders affiliated with Powder River Basin Resource Council, Missourians Organizing for Reform and Empowerment (MORE), CO-FORCE (Coloradans for Fair Rates and Clean Energy), and Forgotten People from Black Mesa/Big Mountain in Arizona converged in Gillette, Wyoming, on Monday, April 29, 2013, at Peabody's Annual General Meeting. Peabody has always held its meeting near its headquarters in St. Louis, but moved it this year to avoid public scrutiny. After the meeting, an activist affiliated with MORE was arrested dropping a banner saying, "Peabody Attacks: Pensions, Diné Lands, Climate." 2 other activists were arrested for holding up banner in the parking lot that said "Peabody Abandons Miners."

Shareholders asked targeted questions to CEO Greg Boyce and the Peabody Board of Directors regarding its current business model which consistently externalizes its costs to coal mine neighbors, workers, and the environment. Peabody's creation of now-bankrupt Patriot Coal to unload its pension and healthcare obligations to retired miners is a recent example of how Peabody disregards its own workers. Shareholders stood with the United Mine Workers of America (UMWA) in Gillette in demanding that Peabody pay its retired miners what they were promised, while thousands more rallied in St. Louis.

Just as Peabody is threatening the livelihoods of UMWA retirees, Peabody was also confronted today by two residents of the Black Mesa/Big Mountain area in Arizona. For decades, Peabody has been involved in the forced relocation of tens of thousands of Diné and Hopi on Black Mesa. In January, residents of Black Mesa attempted to meet with CEO Greg Boyce in St. Louis. He refused, and twelve people were arrested attempting to deliver a letter from Black Mesa residents to Peabody.

"This winter, we travelled to Peabody's headquarters in St. Louis to bring them a message from the people of Black Mesa, whom Peabody is displacing from their ancestral lands to expand their strip mines. Instead of holding a dialogue, Boyce hid behind security and hired police; now we have come to Gillette so that we can express our concerns face-to-face," said Don Yellowman, of Forgotten People on Black Mesa/Big Mountain in Arizona.

Shareholders also drew attention to Peabody's attempts to cheat American taxpayers by leasing artificially cheap coal from the Bureau of Land Management. This practice is now under unprecedented investigation by the Government Accountability Office, the Department of the Interior, and Congress, and it could pose a large risk to the financial viability of Peabody's mining efforts in the Powder River Basin. Today, over 135,000 petitions were delivered to Interior Secretary Sally Jewell calling for a moratorium on new coal leasing in the Powder River Basin. The petitions follow an April 15 letter to Secretary Jewell signed by the leaders of 21 environmental, public health, consumer rights and community organizations calling for a moratorium and comprehensive review of the federal coal leasing program.

"Peabody's chickens have come home to roost," stated LJ Turner, a Wyoming rancher who lives near Peabody's North Antelope Rochelle Mine. "For too long, Peabody has ignored the true cost of its coal mines in the Powder River Basin, but now Congress and others are starting to pay attention to the impacts of mining on people, our air and land, and the climate."

Shareholders' concerns are underlined by a recent subpoena of Peabody by the Securities and Exchange Commission, related to the building and development of the Prairie State Energy Campus in Marissa, IL. Peabody, once the full developer of the project, sold of 95% of the plant to hundreds of towns and cities across the Midwest who are now paying for the plant's extreme cost overruns in their monthly bills.