It's been a long fourteen months for Matt Teter, the former executive director of the Missouri Democratic Party, who last year stepped down from his post upon news he'd been arrested for domestic assault.

The alleged incident occurred in the early morning hours following the Mardi Gras parade in Soulard in February 2012. According to a police report, Teter and his partner got into an argument that turned violent inside their Soulard home. The arrest made headlines a couple weeks later and forced Teter to step down from his post with the Democratic Party.

Ten months later, Teter says the arrest continued to haunt him and cost him a job as Lewis Reed's campaign manager for the St. Louis mayor's race when political operatives with incumbent Francis Slay latched onto the story.

"A number of people have tried to push this story, and it has received a lot of attention from political folks," says Teter, who has always maintained that the arrest was baseless.

On Friday St. Louis Circuit Judge Robert Dierker agreed with Teter. In ordering that the arrest record be expunged, Dierker noted that the arrest was based on false information and no probable cause existed to believe that Teter committed the offense. Teter was never prosecuted following the arrest.

Teter tells Daily RFT that expunging his record had been a major priority for him over the past year, and he's yet to figure out his next career move. He declined to speculate as to why his ex would drum up false allegations, other than to say: "This was a very troubled individual that had a lot of troubles going on in his life."

Continue on to view a copy of Judge Dierker's ruling. 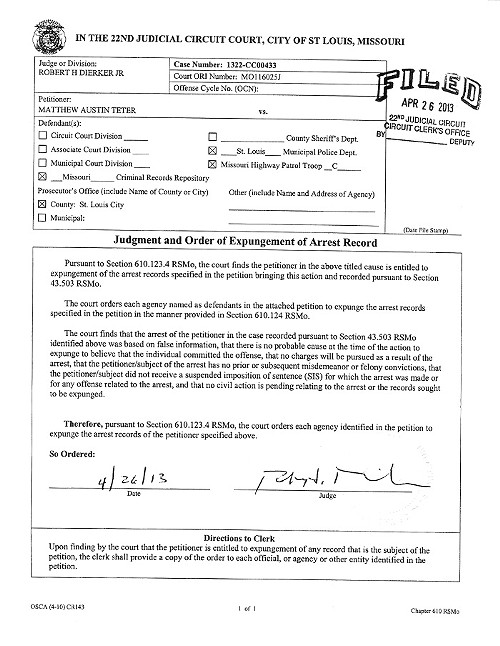