Francis Slay is Longest Serving Mayor After 4,394 Days; A Look Back at Past Record Terms 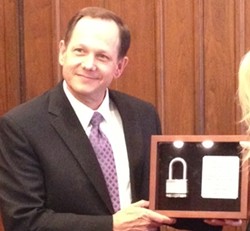 This past Saturday, April 27, was St. Louis Mayor Francis Slay's 4,394th day in office, which, by his staff's calculations, officially makes him the longest serving mayor in the history of the city.

Slay received a formal proclamation signed by his staff plus a symbolic "lock to the city" on Friday (more photos below) and Eddie Roth, chief of operations for Slay, has offered old newspaper clippings to explain his math and take a look back at some of the previously longest-serving mayors. Check out these archival front pages below of past mayors of the city. 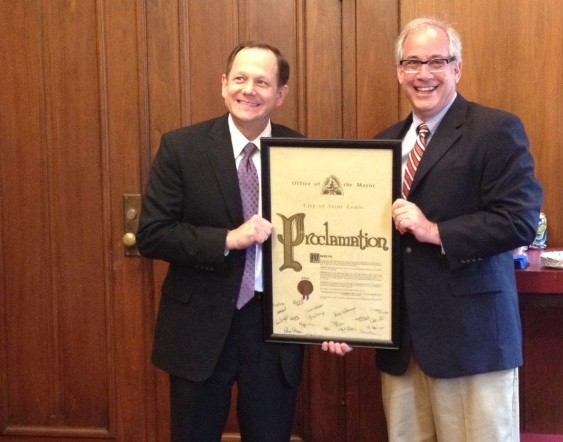 Mayors Tucker and Schoemehl first took their oaths of office on April 21st (1953 and 1981, respectively). They were succeeded by Mayors Cervantes and Bosley, who were inaugurated on April 20 (1965 and 1993, respectively).

Kiel, Roth explains, served 4,393 days in office, because he was inaugurated nine days earlier than his successors.

Slay, who was formally elected to his fourth four-year term earlier this month -- after defeating his primary challenger Lewis Reed in March -- has now passed his 4,394 days in office, which means he has held the position longer than anyone else.

Need proof? Roth collected and posted these neat Post-Dispatch covers from previous inaugurations. Check them out here followed by more photos from Friday's office gathering, which his staff sent to Daily RFT.