Update: The small town of Manchester, Illinois is now in the national spotlight after Rick Odell Smith, 43, reportedly broke into a home in the middle of the night and shot and killed five members of a family, including a young boy and an infant. Our original coverage of the shooting is below.

The latest twist in this horrific case is that Smith, who is now also dead, is the nephew of Manchester Mayor Ronald Drake.

"The last time I talked to him, he was real decent and everything," Drake said of Smith, who police say was shot in a police pursuit after the murders. "We're just going to have to press on and ask the Lord to help us go on."

The Associated Press says that they Drake hadn't spoken to his nephew in two years.

In another interview, he said he had no idea of a possible motive.

As we reported earlier, police believe that he broke in and shot all five victims at close range.

KTVI (Channel 2) spoke with the gunman's brother, Bryan Smith, who said that Rick Smith was the estranged boyfriend of one of the victims. Here's the station's interview with him:

Another shocking detail from that interview: Brittney Luark, the 29-year-old victim, was believed to be pregnant.

Meanwhile, a six-year-old girl who was shot is in critical condition in the hospital. Authorities are still trying to figure out why the suspect carried her to a neighbor's house. Sources say Smith asked that neighbor to take her to a hospital.

Update, 11:50 a.m.: The Scott County coroner's office has released the names of the five murder victims -- and confirm that Brittney Luark was pregnant:

The sixth victim is a six year old child who remains hospitalized and remains in serious condition.

Continue for more photos and for our original coverage of the shooting. 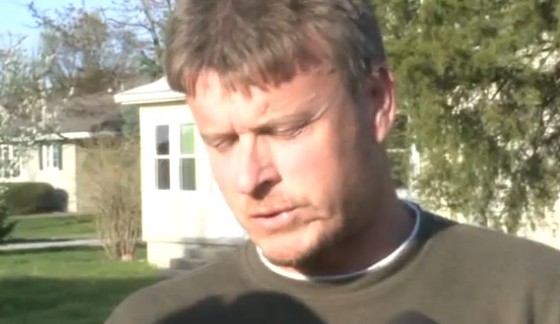 Continue for our original coverage.

Update, Wednesday, April 24, 6:04: Illinois State Police have released new details in a shooting in the small town of Manchester early this morning that left five people and the suspect dead after a police chase. Our original coverage is below.

The five victims included a male adult, two female adults, and boy and an infant male. A six-year-old girl was also shot and remains in critical condition at a hospital, officials say.

Police say that the gunman, based on witness accounts, carried the injured six-year-old outside of the residence and put her in the hands of a neighbor.

The victims were all reportedly related.

The authorities say that Smith forced entry from a backdoor and fired shots at close range. Two of the bodies were discovered in one bedroom, two in another and one male adult was discovered in the hallway.

In the police pursuit, officials say, it appears that the suspect fired shots at police, who fired back. Smith was then taken to a hospital and died just after 10 a.m.

The last homicide in all of Scott County was in 1993, officials say. And this is the first known multiple homicide ever in the county.

Here's the full news release from state police, followed by a video of the latest press conference and our original coverage.

Law enforcement officials confirmed that five victims ranging in ages from an infant to adults were discovered deceased at the scene. Two male children, one male adult, and two female adults were identified. A six year old female child also suffered gunshot wounds and remains in critical condition at an area hospital.

It appears that the offender forced entry from the backdoor. Based on the shell casings located at the crime scene, it also appears that the weapon used was a shotgun fired at close range. Illinois State Police Crime Scene Services is analyzing forensic and ballistic evidence.

Based on witness statements, the offender took the 6 year old outside of the residence and put her in the hands of a neighbor.

As far as the pursuit and shots exchanged, police are still investigating the scene and interviewing the officers involved. Based on preliminary investigative details, the offender exited his vehicle pointed and discharged his firearm at police.

The officer's returned fire striking the offender, Rick Odell Smith, 43 of a last known address in rural Morgan County. The offender was taken into custody and transported to an area hospital in critical condition. He was later pronounced dead at the hospital at approximately 10:10 a.m.

Illinois State Police Director Hiram Grau commended the combined efforts of all the law enforcement agencies involved in investigating this tragic homicide. "The Manchester community is saddened by this tragic loss and on behalf of the Illinois State Police and our law enforcement partners, we offer condolences and support during this time of grief," said ISP Director Hiram Grau.

Illinois State Police also expressed thanks to the First Baptist Church of Manchester.

The last homicide reported in Scott County was in 1993. This is the first multiple homicide known to Scott County.

Continue for video of the latest press conference and our original coverage.

Here's video of the most recent press conference, courtesy of the Post-Dispatch:

In this early stage of the investigation, officials didn't have many details they could offer, but they confirmed that five people were shot and killed around 4:30 a.m. -- and the suspect is also dead.

The suspect fled the residence where the shooting took place, prompting a police pursuit, Illinois State Police Capt. Todd Kilby said, adding that "shots were exchanged." After 7 a.m., the suspect was pronounced dead.

"At this point, we aren't discussing motive or relationship," he told reporters, without taking questions.

A six-year-old girl was in the residence at the time and was taken to the hospital, he added.

"There is no reason to believe there is any further danger to the communities or that there are any other suspects," Kilby said.

Officials will hold another press conference at 3 p.m.

Ron Drake, the mayor of Manchester, which has a population of just a few hundred, says that a suspect is in custody after a police chase, KMOX reports.

The five victims were reportedly shot to death inside a home, prompting a 911 call around 4:45 a.m. A sixth person was injured in the shooting, according to news reports. Classes have been canceled in three local school districts.

Daily RFT left messages this morning with Illinois State Police, which is expected to hold a press conference shortly, and the Scott County Sheriff's Office. Manchester is small enough that it does not have its own police department. We could not reach the mayor for comment.

He told KMOX that he had very few details yet, adding, "This is a nice little town."

We'll update as more information is available. The shooting has already gotten national attention this morning.