Cyclists Hope to Revive St. Louis' Velodrome, One of Only 27 Banked Tracks in U.S.

It's often referred to as Mr. Bumpy Face, and as its name implies, it has seen better days. Still, there's something special about that neglected elliptical patch of asphalt at Kingshighway Boulevard and Interstate 70. Only 27 bike tracks like it exist in the nation.

In the 1960s cyclists from all over ventured to St. Louis to spin around the banked turns of the Penrose Park velodrome. Now, though, the track's surface is nearly un-rideable as cracks and bumps in the track are not only annoying but also dangerous.

Hit a bump in the road in a car at 40 mph? Fine. But on a bicycle with one's feet locked into the pedals and unable to brake, elbow to elbow with other racers? Not so much.

"Without completely removing the current aged asphalt and replacing it with a new concrete surface, the velodrome will again soon be unusable," says Ogilvie. 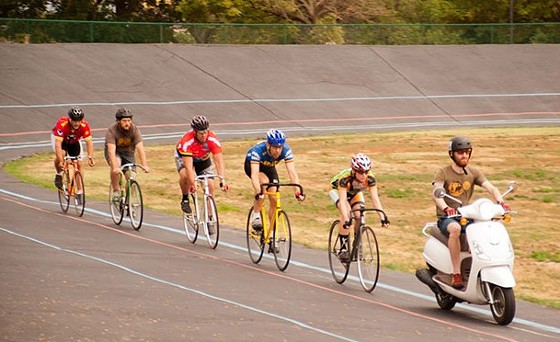 Basic needs such as resurfacing the asphalt and installing restroom facilities are immediate priorities. And while many in the cycling community are hopeful that the velodrome will get some money from a recent bond measure to improve city parks, nothing is guaranteed.

So, they've begun efforts to raise the money on their own. Black Bear Bakery and 4 Hands Brewing company have raised a total $4,800. The nonprofit organization Missouri Bicycle Racing Association, or MOBRA, has also chipped in with funding to repair some of the worst cracks on the velodrome for this racing season. Mike's Bikes donated a port-a-potty. "That prevents us from using the bushes," says Maplewood Bicycles employee and Penrose Park Velodrome steering committee member Molly Brady.

Community involvement is also a vital aspect of the velodrome, allowing it to survive till now on T-shirt and bake sales and Paypal donations, many of which come from fans of the Thursday night races.

The 2013 season kicks off tonight at 6 p.m. with an open house for the public. Stop by to meet state and national cyclists, including Olympic gold medalist track cyclist Mark Gorski, Alderman Ogilvie and Alderwoman Sharon Tyus (Ward 1). More details about the velodrome's history and its funding campaign can be found at penroseparkvelo.com.