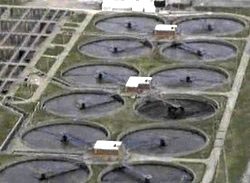 Since a failure at a Metropolitan St. Louis Sewer District treatment plant Sunday night, millions of gallons of sewage have continued to flow into the Mississippi River. As officials work to secure backup pumps this week -- and as the high water levels remain -- the problem persists.

Is our drinking water at risk?

"I'm certainly not trying to justify this.... It's not in any way, shape or form OK," spokesman Lance LeComb tells Daily RFT, "but when you look at it, it's all really very diluted."

What went wrong -- and why is the sewage still flowing into the river three days later?

LeComb explains to us that when the river gets above 32.5 feet, the Bissell Point Wastewater Treatment Plant in north St. Louis is required to pump out treated water into the Mississippi.

The plant has three large pumps that are typically able to pump out a total of 250 million gallons a day, he says.

That means officials faced a serious and rare problem when two of them failed on Sunday night.

The plant lost its capacity to pump over the floodwall, LeComb says, which "causes us to start discharging what we are receiving through the plant directly to the Mississippi."

Since those two pumps failed, the plant was brought down to a capacity of only about 90 million gallons per day. Meanwhile officials have been able to obtain some temporary pumps. They are now successfully treating about 145 million gallons a day -- which means an additional 105 million gallons of untreated sewage per day continues to enter the river.

Unfortunately, when the two pumps failed, one of the backup pumps happened to also be out for rebuilding, LeComb says.

He emphasizes, "It is not 100 percent raw sewage. It is heavily diluted."

LeComb adds, "It's like putting a thimble into a swimming pool." 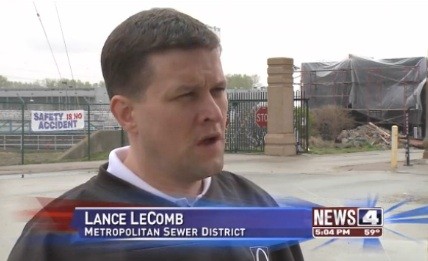 In terms of the impact on drinking water, he says, "Unfortunately, the Mississippi is a polluted waterway already.... It's not really raising the risk level in any measurable fashion."

Regardless of this problem, the water companies have to keep water clean and treat it to Environmental Protection Agency standards.

"We have some of the best water in the country," he says, pointing out that animal waste contaminates the water and that it is treated before it becomes drinking water.

In St. Louis, the Mississippi is also not a recreation area, he adds.

There is no specific timeline for the pumps to be fully restored back to normal, he says, but adds that the flow of untreated waste should stop by the end of the week, due to expected decline in water levels.

Is this kind of failure common?

In recent memory of those at the St. Louis Sewer District, "It's certainly unprecedented," he says.