In case you missed it, a whopping total of 114 barges that were docked in south St. Louis County broke free in the Mississippi River over the weekend, sparking a Coast Guard operation to secure the runaway barges and limit the damage. Four of them hit the Jefferson Barracks Bridge.

And eleven of them sank -- and are still submerged in the river now.

Water levels locally have risen 25 feet over the last 25 days, Lt. Colin Fogarty of the U.S. Coast Guard tells Daily RFT. "That rise, of course, while not unprecedented is not common."

Of the runaway barges, he says, "All have been accounted for."

What's next? Check out the photos and footage below for a closer look at the barge accident.

Following a survey to assess the navigability of the river following the 114-barge breakaway, the Coast Guard announced late yesterday afternoon that it had authorized the reopening of the river -- which was shut down over a fifteen-mile stretch.

Officials say that efforts are underway by American Commercial Lines, the main owner of the barges, to "develop salvage plans to raise the eleven sunken barges" in the Mississippi.

Army Corps of Engineers and ACL surveys determined that there are no threats to navigation, the Coast Guard says.

While the river was closed for about 36 hours, there were no injuries, deaths -- or oil spills.

"We're working with [ACL] to figure out a plan," Fogarty says, adding of the rising water levels, "The river industry has to constantly adapt."

In the meantime, below are some photos of the escaped barges from the Coast Guard, with their official captions.

These were taken by Petty Officer Second Class William Rogers during a Coast Guard Air Patrol over the St. Louis region on Sunday:

" A photograph of partially sunken barge while a Fleet-boat passes by. During the break away Fleeter-boats, such as the one pictured, acted quickly to secure the barges. During the river closure, special permission was given by the Coast Guard for these vessels to navigate the river to locate and secure unaccounted for barges." 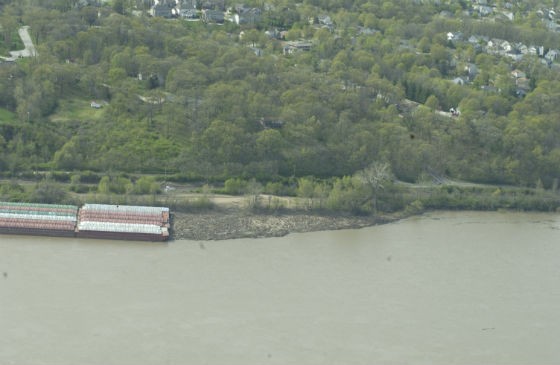 "A picture displaying a large amount of wood piling up against a barge fleet. Commonly referred to as 'drift' this phenomena poses a large threat to vessels operating on the river and to fleeting areas. Drift can cause serious damage to the propellers of ships and drift buildup on fleeting areas causes additional weight and resistance to current potentially causing breakaways."

"A picture of a liquid carrying barge pushed up against the Illinois Side of the Mississippi River. The barge will later be moved to a fleeting area and inspected by the Coast Guard for damages."

"A photograph of two barges that have been secured by Fleeter-boats in the area. These barges will later be moved to a fleeting area."

Continue for more photos and a video.

"A photograph of two barges, one still visible above the waterline, another attached and completely submerged. These barges are just south of the Jefferson Barracks Bridge and are in the closed section of the Mississippi River."

Continue for more photos and a video.