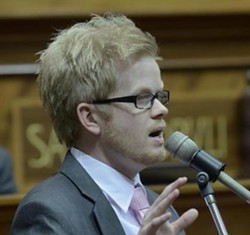 No one will try and grab your guns in Missouri!

Such is the underlying message of a letter from Republican State Representative Caleb Rowden, who is trying to woo gun companies to bring their business to Missouri, a state that does not tolerate any threats to the Second Amendment.

"Missouri's Republicans and Democrats alike will tell you -- the right to bear arms is non-negotiable," Rowden writes in a letter he fired off last week to eight gun companies.

Given the success of pro-gun bills and the failure of all gun control efforts here, he may have a point. Check out the full letter below.

As we've reported, the Missouri legislature this session has devoted a significant amount of energy to proposals designed to block any and all gun control locally or federally. Last week, the House passed a "Second Amendment Preservation" Act and lawmakers have also had success with a bill to criminalize the enforcement of any federal executive orders tied to gun control. And one of the most discussed issues at the Missouri State Capitol in recent weeks is about gun owner privacy.

And in terms of pro-gun bills that have been introduced, it's difficult to keep track. There was the one that would make it illegal for lawmakers here to even introduce gun control legislation. There was another that would ban doctors and schools from asking about guns. There was an effort to rewrite the constitution to make Second Amendment rights even clearer in Missouri. And there was recently one that would punish businesses that ban guns on their property. And on and on and on.

In this climate, proposals for stricter laws aimed at preventing gun violence get absolutely nowhere. (And sometimes these gun control bills literally get shot at with actual bullets).

All of these factors, it seems, makes Missouri a really ideal place for gun businesses.

That's why Rowden, who is from Columbia, sent a letter to eight companies that he says "are leaving other states because of their disrespect for the 2nd Amendment and the rule of law."

His office says he will also be trying to set up meetings with the businesses in an effort to lure them here.

The letter argues that, in addition to the state's intense respect for the Second Amendment, Missouri is a "sportsman's paradise," has a friendly economic climate, is centrally located, has a thriving manufacturing industry and is well connected.

Apparently, not everyone is pleased with his letter:

I was called a 'diva' today by someone who didn't like my letters to gun companies. There has to be some irony in a diva seeking out guns!

But he says that this is about jobs:

Glad to work w/ @columbiaredi and others to try and bring new manufacturers to mid-Missouri! JOBS, JOBS, JOBS! ---> bit.ly/13qHPYn

Daily RFT left a message with his office to see if he wanted to comment further about his efforts. We'll update if we hear back. In the meantime, here's the full letter.