Roy Blunt, No on Background Checks: "We Must Do Everything We Can to Prevent Tragedies" 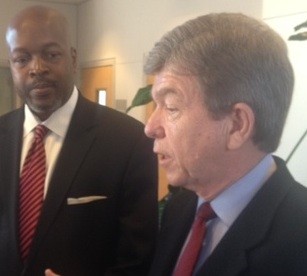 U.S. Senator Roy Blunt, a Missouri Republican, yesterday voted against a proposal to expand gun background checks in the country.

Then he fired off this statement, that said, in part: "We must do everything we can to prevent tragedies like those that took place in Newtown Aurora, or Tucson..."

Blunt was one of 46 senators who voted no, helping to defeat the bipartisan proposal and dealing a significant blow to those who have been pushing for tougher gun restrictions since last year's elementary-school shooting.

Why? His press-release header: "Senator Blunt Stands Up For Americans' Second Amendment Rights."

Here's footage of a recent interview of Blunt this week, in which he explained his opposition to the background check proposal under consideration.

Blunt has focused on mental health efforts and has said that while he is not entirely opposed to stricter background checks, he wouldn't support measures that stop neighbors and family members from being able to trade guns.

The high-stakes showdown yesterday centered on a bipartisan proposal to expand federal background checks to more gun buyers by requiring them for all transactions at gun shows and online.

Critics say they are concerned with government officials establishing some sort of "gun registry" -- a debate which has intensified in Missouri.

Blunt, along with other Senate Republicans, had sponsored a watered-down alternative proposal that "would have reauthorized and improved the National Instant Criminal Background Check System."

"We must do everything we can to prevent tragedies like those that took place in Newtown, Aurora, or Tucson, without restricting the Second Amendment rights of law-abiding citizens," said Blunt. "I'm disappointed this provision, which offered real solutions to keep Americans safe from senseless acts of violence, was ultimately blocked."