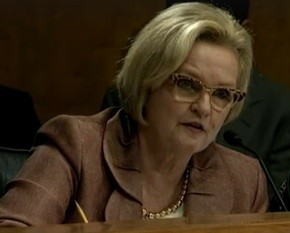 In the aftermath of the Boston Marathon bombing this week, officials across the country have labeled the attack an act of terrorism, even at this early stage in the investigation, in which little is publicly known about potential suspects.

But U.S. Senator Claire McCaskill, a Missouri Democrat, raised an interesting question yesterday that has since gotten her a lot of attention.

"Based on the evidence at this point, is there any difference between Sandy Hook and Boston other than the choice of weapon?" McCaskill asked, referencing the Newtown elementary-school shooting last year. Check out her full comments in the video below.

The topic was particularly timely given the Senate's high-stakes vote on a bipartisan gun control bill that would have expanded background checks to gun shows and online sales. McCaskill voted in favor of the bill and her Republican colleague Roy Blunt voted no. It didn't pass.

That legislation was sparked in part by the devastating school shooting in December that left twenty children dead in Connecticut.

Here are excerpts of the exchange yesterday after McCaskill asked about the difference between Boston and Newtown:

"In terms of intent for death and destruction and injury, no," Napolitano said, "Methodology, yes. And we don't know the motivation behind, certainly, Boston -- we don't know whether it was domestic, it's international...."

"Or if it was identical to the motivation in Sandy Hook," McCaskill suggested. "It's impossible for me to sit at the table today and say they are identical except in effect and impact," Napolitano said....

"I don't know the answer to that question," the secretary replied.