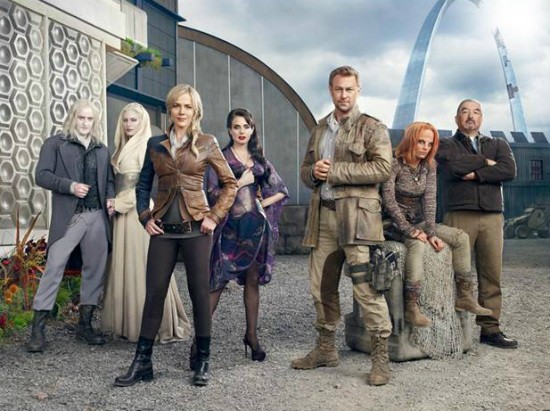 It has been almost a year since the first rumblings of SyFy channel's original science-fiction drama Defiance made waves on the Internets. Daily RFT's interest was piqued by its setting: It unfolds 33 years in the future in St. Louis, though Earth has been terraformed by an alien species crashing into the planet. Little remains of the St. Louis we call home -- no Mississippi River, for example -- but somehow the Arch still stands, if not a little worse for wear.

The show unfolds more like a video game than a TV series (appropriately, the show has a companion video game of the same name that's, oddly, set in San Francisco), with shaky exposition, special effects and melodramatic plot lines, but at its best echoes its obvious sci-fi influences, Battlestar Galactica and Joss Whedon's show about cowboys in space, Firefly.

The pilot opens with voice-over narration explaining what happened to Earth while an accompanying montage helps sum it up. Many species of aliens (collectively called "Voltans") descended upon Earth thinking it uninhabited, but upon finding otherwise, proceed peacefully. We learn that the United Nations granted some aliens access to form colonies in Brazil and elsewhere, while the rest of the aliens remain in hypersleep as the two governments negotiate. This drags on for ten years. Then an alien ambassador is assassinated, and war breaks out.

We find out that the narrator is Irisa, an alien species known as Irathient, who was born into the conflict. Eventually the two sides, resources exhausted by war, agree to a ceasefire. Irisa is adopted by a human (and former U.S. Marine) named Jeb Nolan, and together the pair travel around the dicey uninhabitable "badlands" of America, scavenging for space technology to sell. Eventually they'd like to end up in "paradise," in Antarctica.

One day, while scouring an abandoned spaceship for parts, Jeb and Irisa encounter a biker-meet-Steampunk gang who intend to shake them down for whatever treasures they've recovered. They manage to get away, but just barely, and then some more stuff happens (really it's not important), and they meet another human in the woods, the "law person" of the city of Defiance. They agree to follow him back to the town in search of money and creature comforts.

And then, fifteen minutes into the show, we see the St. Louis Arch.

Continue for more on the St. Louis references and a clip of Defiance.

And a behind-the-scenes video about the pilot.

Behind the Arch, mountains just as tall loom -- what we lost in the mighty Mississippi we gained in mountains, apparently. Jeb recognizes they're standing in what once was St. Louis. The lawman corrects him. "Now they call it Defiance."

From there the pilot takes viewers on a ride that includes Jeb visiting a brothel, tracking a killer, helping Defiance defend itself against certain destruction in a battle and taking up the position of lawman when the old lawman dies. Right before said big battle the mayor of Defiance (a lady mayor at that, St. Louis!) points up at the Arch and rallies the town with the battle cry, "For that big ass Arch up there!"

It survived, after all, while seemingly nothing else did.

Oh, and for a second or two we see a fragment of road that's supposedly Highway 40. Truly this is of note for a St. Louisian, as otherwise the hour-and-a-half running time is just meandering, middling dialogue and action that culminates in an obvious conclusion. If it weren't set in our city, we'd have turned it off by now.

At the end of the episode we learn that Jeb was just a young boy living in St. Louis in 2013 when the aliens first arrived on Earth. And now he's back, to defend what's left of his home.

Defiance airs on SyFy on Monday nights at 8 p.m. CST.