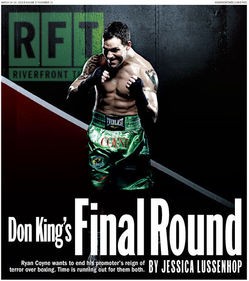 Updated: Tonight, under the lights in a boxing ring in Las Vegas, local boy Ryan Coyne will finally get the chance to fight.

As we documented in our March 14 feature "Don King's Final Round," the St. Charles southpaw saw his promising career grind to a halt after his relationship with King went sour.

None of that -- not even the fact that Coyne and King are currently suing one another -- seemingly matters tonight, when Coyne takes on Marcus Oliveira in his first Don King-promoted fight since 2011.

Both Coyne and Oliveira (another King fighter) are undefeated and eager to get their careers to the next level. The winner of tonight's fight will be automatically matched up against the WBA light heavyweight title holder, Beibut Shumenov of Kazakhstan. As Coyne told us many times, that world title is his whole reason he's sticking with boxing even after King put him on a shelf.

Given the level of contempt Coyne has for his former promoter (last time Daily RFT spoke to the Irish Outlaw he called King a "worthless turd"), it's shocking to see them together onstage (photos here) at the fight's press conference earlier this week, King beaming and waving his trademark flags.

That smile might be a devious one, as some have hypothesized King does not believe Coyne can beat Oliveira and is actually trying to further sabotage Coyne's career. Coyne acknowledged as much in a conversation with BoxingScene.com:

Make no mistake, this fight is a set-up. He doesn't want this legal spat anymore than I do. It's pointless with nothing to gain. King wants to see me get beat, but a set-up blows up in your face when you send the hitman back to the boss in a duffle bag. I'm well aware of the factors at play here and I'm coming to wreck plans.

Unfortunately for fans in St. Louis, while the headlining matches in the "Fight for Freedom" will be on Showtime, Coyne's match will not. We'll have to wait until post-fight to find out what's next for the Outlaw -- glory or more purgatory.

Update: Alan Hopper, Don King's vice president of public relations, felt we were remiss in not publishing the "complimentary" words Coyne expressed toward his former promoter at Wednesday's weigh-in -- and we agree. Here's Coyne's full quote:

Don (King) talked about frustrations. I've had a lot in the last eight months. It was a battle to get this fight. I know my opponent is a very good athlete and puncher. There is no need to demonize my opponent, but I will win on Friday night.

I've said a lot of harsh things over the last eight months but I want to thank everybody, including Don King.