Are these the worst "best fans in baseball?"

With baseball season in full swing, we've expressed our joy here at Daily RFT with a roundup of really friggin' excited St. Louisans on Opening Day and some photos of the most die-hard Cardinals fans at Busch Stadium.

But we're all about balance, which brings us to the topic of this post: @BestFansStLouis, the Twitter account that retweets the most vile, awful, horrible comments of frustrated Cardinals fans. A public shaming, if you will.

Racism and homophobia below!

The account, with more than 3,000 followers, retweets awful things that Cardinals fans say -- the slurs and obscenities they direct at the other team or sometimes even at their own team when they are not pleased with a game.

If you're offended by racism, homophobia, bad words or bad spelling -- the account also retweets those upset with that "trader" Pujols! -- look away.

Otherwise, ladies and gentlemen, we present to you to the top nineteen worst tweets of the new season:

Hey Choo maybe you should open your eyes if your gonna play center field!! #justsayin

I think Choo's eyes were closed on that one. Or were they? #asian 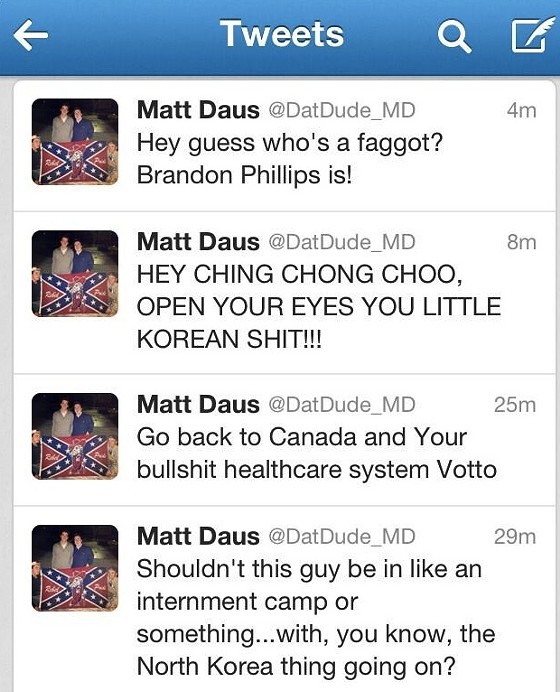 Lol there's your Choo for ya. Chink.

Rafael Furcal out for the year due to a torn vagina

I hope my #STLCardinals beat thee brakes off them faggot ass #reds this season!!!

Gay ass giants would get their rings when they play the cardinals..FAGGOTS!

Salas is going to blow it. Just like the leaves he blows forth from the lawn. Get it? He's Mexican.

Ay let's back off Pujols for taking more money... He's got mouths to feed back in the Dominican.. Probably about 500 mouths #beaner

What a disastrous fucking night. And fuck you @mlb & your having the #stlcards open in BFE. Fuck off. Goodnight folks

Lol at how much I hate that trader Albert

Brandon Phillips is fucking awful. I hope he dies along with all other reds.

1. What Happens When You Don't Watch the Cardinals