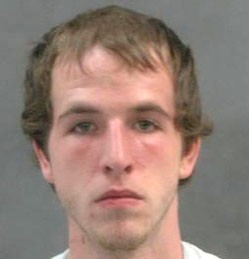 Update: St. Louis resident William Gallagher, eighteen, has been charged in the hit-and-run crash this week that killed 87-year-old Virginia Bedrosian. Our original coverage is below.

A probable cause statement form the circuit attorney's office says that Gallagher is facing charges of second-degree murder, armed criminal action, resisting arrest, assault on an officer and leaving the scene of an accident. Of note, the report says that he was driving around 85 miles an hour at the time of the incident -- more than three times the speed limit on Osage Street, where he eventually collided with another vehicle.

As we reported, Gallagher, who was driving with a sixteen-year-old girl by his side, had earlier fled from police officers. When the collision took place on Tuesday, the statement says that Bedrosian was in the passenger seat and that her daughter was in the driver's seat. The mother died a few hours after the crash.

The report also reveals that Gallagher had allegedly stolen the car, which is why authorities were trying to apprehend him in the first place. The statement says:

It wasn't his last confrontation with police that day. After the fatal crash, he ran on foot, police say, until cops caught up with him and finally were able to place him under arrest.

Below is our report from yesterday, followed by the full probable cause statement.

An 87-year-old woman was killed in a hit-and-run collision yesterday after two teenagers, who were fleeing police in St. Louis, crashed their vehicle, officials say.

Virginia Bedrosian, from Greenville, Illinois, was taken to the hospital in critical condition and died a short while later.

The suspects are in custody and charges are expected soon, possibly later this afternoon, police say.

Police located the two on South Grand Avenue in a stolen vehicle around 2:15 p.m., the official report says.

As officers asked them to step out, the male suspect in the driver's seat allegedly put the car in reverse -- and nearly hit an officer. They fled east on Osage Street and soon after hit another car on Nebraska Avenue.

In that car were three individuals -- a 64-year-old man, a 59-year-old female and Bedrosian, who was fatally killed in the collision. The two others were also taken to the hospital and are expected to survive.

The chase, however, did not end there.

Continue for more on the crash, the full statement, and a video from the scene.

Police say that the two teens began running on foot after the fatal crash. Witnesses helped direct police in the right direction and after a short foot pursuit, they apprehended both of them.

The sixteen-year-old girl was taken to a nearby hospital for a "wellness check," police say, and later placed in the custody of juvenile authorities.

The eighteen-year-old could face charges of first-degree murder, a felony count of resisting arrest and more.

Here's KSDK's report from the scene of the crash, followed by the full incident report from SLMPD.

Incident: Murder 1st/Assault 1st/Tampering 1st/Felony Resisting
Location: 3900 block of S. Grand
Dates/Times: 04/09/13 @ 14:14
Victim #1: Virginia Bedrosian, 87-year old white female of Greenville, IL.
Victim #2: 59-year old white female
Victim #3: 64-year old white male
Suspect #1: 18-year old white male
Suspect #2: 16-year old white female
Officers received a radio assignment from Jefferson County seeking help in locating an 18-year old male suspect and a 16-year old female suspect (runaway). Officers went to the area of Grand and observed the suspects in a stolen vehicle. As officers asked the suspects to step out of the vehicle, the male suspect put the vehicle in reverse, nearly striking an officer and fled the scene east on Osage. The suspect vehicle struck a vehicle, occupied by three people at Osage and Nebraska. Other officers in the area traveled the path which they believed the suspect vehicle had taken and came upon the accident scene where witnesses gave a description of the suspects, who were now on foot, and gave their direction of travel. Officers were able to apprehend the suspects after a brief foot pursuit. The juvenile female suspect was transported to an area hospital for a wellness check and later remanded to the custody of Juvenile authorities. An 87-year old female who was in the vehicle that was struck by the suspect's vehicle was transported to an area hospital in critical/stable condition. She later died as a result of her injuries. The two other occupants of the struck vehicle were transported to hospital. Their conditions are unknown, but their injuries did not appear to be life threatening. There was no police pursuit as in-car camera video has already been reviewed. The investigation is ongoing and is being handled at district level. Investigators are expected to apply for warrants this afternoon.

Here's the probable cause statement.