Missouri Republicans are pushing forward with a privacy bill to block the state from maintaining personal records -- and in the process have introduced an amendment that supporters say will make it easier to get concealed-carry permits.

That proposal from State Senator Ed Emery would eliminate the state department of revenue from the concealed-carry permit process, leaving the endorsements entirely to local sheriff's offices.

"It was a burden to people's Second Amendment rights," Josh Foster, Emery's chief of staff, tells Daily RFT. "It's just an attempt to relieve that burden to a constitutional protection."

The Senate on Tuesday gave initial approval to Senate Bill 252, which bans the department of revenue from retaining copies of source documents used to obtain driver's licenses and other forms of identification. The bill, which include's Emery's amendment, has another vote today and could then head to the House.

That proposal was inspired by a lawsuit earlier this year from a Stoddard County resident who alleged that the state tried to scan his personal documents when he was applying for a concealed-carry endorsement. 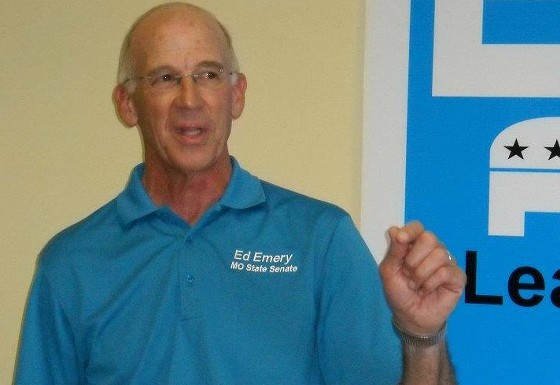 That ongoing legal battle sparked an avalanche of opposition from Missouri Republicans, who say they are worried the state is sending off information about gun owners to the feds and violating their privacy by even maintaining these records in the first place. The proposed legislation, on view below, orders the state to stop keeping these records -- and destroy any if they have in the past.

(The state has repeatedly denied allegations that it is sending anything out of Missouru, and when pressed on the matter, Governor Jay Nixon recently said the state wasn't trying "to mess with people" by building "a magical database.")

Emery's amendment to the bill sponsored by State Senator Will Kraus gets rid of the final step in the process of getting a concealed-carry endorsement, which his office argues would be a win-win.

"It alleviates...the privacy concerns that many concealed-carry holders have with giving their information and having it scanned," Foster says. "We see this as a simple fix."

Continue for more details on the proposal and the full draft bill.

Currently, individuals who want approval for concealed-carry have to go through local law enforcement offices and then ultimately to the state department of revenue for a final stamp of approval for their licenses. It is at this last step that concerns around privacy and record-keeping have come up.

He also says Missouri may be the only state that has this extra department of revenue component, anyway.

"It puts us in line with the way most other states deal with concealed-carry permits," he says.

Here's a section detailing the change, followed by the entire most recent draft.

This act repeals the provisions requiring the person to present the certificate to the Department of Revenue for a driver's license or nondriver's license with a concealed carry endorsement. Instead, the permit issued by the sheriff authorizes the person to carry concealed firearms. Under this amendment, the concealed carry permit must contain the holder's name, address, date of birth, gender, height, weight, color of hair, color of eyes, the signatures of the holder and the sheriff issuing the permit, the date of issuance and the expiration date. When asked by a police officer, the concealed carry permit holder must display the permit and a government-issued photo identification.