Liberty Tax Statues of St. Louis: You Think They're Waving, But They're Just Doing the Wop

There was a time when the crocus served as the official harbinger of spring. Not anymore.

A brazen invasive species has usurped the violet flower's role in forecasting the coming vernal equinox. This blueish-green creature emerges in mid-January and plants itself outside strip malls and along busy roadways. For four months it flaps and flutters about on the pavement, inhaling exhaust and sopping up snowmelt, until April 15 (always April 15) when it disappears as quickly and unceremoniously as it arrived.

It is, of course, the patriotic mascot of Liberty Tax Service. In just fifteen years the tax-preparation business based out of Virginia has grown to more than 4,000 locations across the United States. In metro St. Louis the company has some three dozen franchises, and outside nearly every one of these offices a man (occasionally a woman) dressed like Lady Liberty can be found waving or dancing for the attention of passing motorists.

But what makes these mascots tick? Is their job as fun as it sometimes seems or as horrible as it often looks? And what -- besides car honks -- do they get out of their occupation?

All photos by Kristan Lieb for the Riverfront Times.

How long have you been doing this? It's my first year.

What's your favorite part of the job? I like the honks.

What do you do to get people to honk? I dance and try to connect with the person in the car. Smiles are contagious.

What do you do when you're not out here? I take care of my daughter.

How long have you been doing this? Since January.

What's your favorite part of the job? Getting paid. Taking the suit off.

What are you listening to? Pandora. Something to get me in the mood to move around and entertain. If I didn't have music, I think I'd just stand here.

What's the worst part of the job? When you gotta stand out here and it's cold. I was kinda salty in early January because it was nonstop snow, and I was freezing. We get breaks to go in and warm up, though.

What do you do when you're not here? Go out, party, live life.

How long have you been doing this? Two years.

Why did you come back? It's easy and fun. You get to act like a goofball and get paid. Everyone is really nice.

What do you do to get people's attention? I like to dance around and talk to people. Just communicate with them.

What do you do when you're not here? I work at my other job and hang out with my little brother.

How long have you been doing this? This is my first year. I've been out here in the snow and rain since January.

What's your favorite part of the job? I like the attention.

What do you do to get people to honk? I point at them and make eye contact.

What's the worst part of the job? Nothing. Everyone has been really nice. There have been maybe three or four mean people, but I wasn't even sure what they were doing. 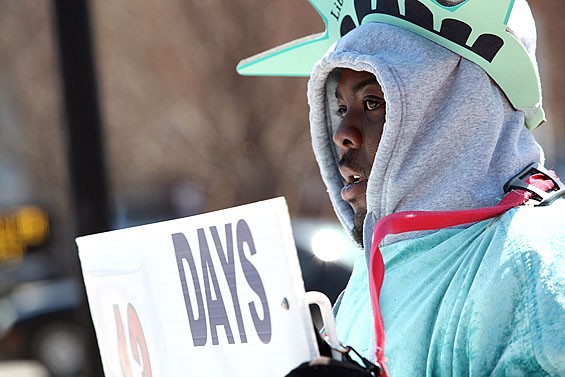 How long have you been doing this? Since February. This is my first year.

What do you like about the job? It's pretty easy. The hours aren't that long. It's a pretty good job to have.

What do you not like about it? When it's cold and windy. February was hard.

What are you listening to? Rap and hip-hop.

What do you do to get people to honk? I just wave back and forth and smile. I don't really dance like the other guys.

What do you do when you aren't here? I hang out with my family a lot. I'm also seeking more employment. 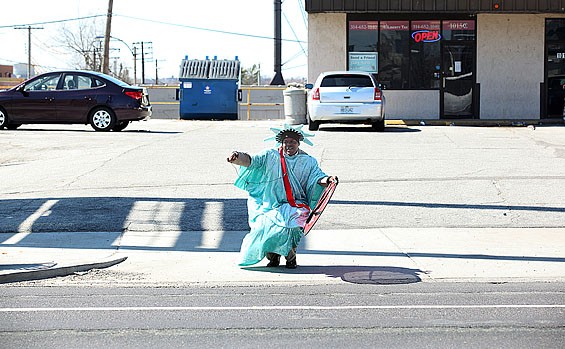 How long have you been doing this? Three months.

What's your favorite part? I love to dance, and they pay me to do it. It's right up my alley. I listen to mixes I got from my computer and just dance. They think I'm waving at them, but really I'm doing the Wop.

What's your least favorite part of the job? I don't have one. I work cheerfully. If you work cheerfully, everything goes smooth. If you come with an attitude, it won't go well.

What do you do when you're not here? I'm a retired boxer and a member of the Nation of Islam.

All photos by Kristan Lieb for the Riverfront Times.