GOP Gun Bill: Businesses That Ban Weapons Are Liable For Injuries on Their Premises 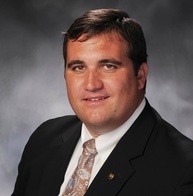 How do you reduce the number of gun-free businesses in Missouri? Make it a lot easier to sue them.

That seems to be thinking of of a new proposal from Republican representative Caleb Jones, who wants private businesses that post signs banning guns to be liable for injuries that occur on their property.

In other words, as we've seen a lot this legislative session, get your hands off of my guns.

How would this work if it were signed into law?

We left a message for Jones yesterday and will update if we hear back.

In the meantime, let's take a look at the draft of the bill, which was introduced last week, as we approach the end of the legislative session.

On the face of it, the bill seems to punish businesses that maintain gun-free zones and reward those that allow concealed-carry in instances of violence.

The one-page bill doesn't include a whole lot of specifics about how the "immunity" for concealed-carry-friendly establishments would work or how exactly a gun-free business would be liable if there were some injury on-site. What kind of evidence would be needed to prove that a gun would've made a difference? Would "no guns" businesses always be liable if violence occurs?

And on the other end, what sort of protections would the legislation provide for businesses that allow guns? Could these establishments uniformly block all litigation related to guns or violence on their property?

It's not immediately clear.

In the final weeks of the session, these kinds of bills are often cast aside by opponents as stunts designed to send a message -- in this case, an obvious pro-gun, anti-gun control one.

And there has been plenty of proposals in Missouri this cycle designed specifically to counter gun-control efforts, including a ban on federal executive orders, a rewriting of the Constitution to make gun rights "inalienable," an effort to criminalize fellow lawmakers who even propose gun control -- and a lot more.