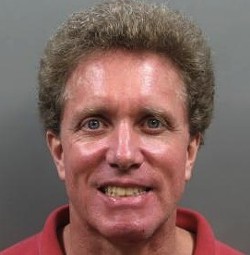 We're not sure what is more bizarre -- the accusations against Timothy Copeland, or the suspect's smiling mugshot. Exhibit A to your right.

As for the allegations, they are, at the very least, as strange as his mug.

Copeland, according to the St. Peters Police Department, was released from prison last month for second-degree arson charges. This fact makes it all the more alarming that when police responded to his home this week, they found that he had been firing shots into the walls of the house -- which had a strong odor of gasoline.

Fortunately, it appears that nobody was injured. (Maybe that's why he's smiling?)

Police say that around 11:30 a.m. on Monday, officers received a radio call for shots fired in the area of Julie Lane in St. Peters.

A neighbor reported what appeared to be a bullet coming through the drywall of her house. Officers investigated and discovered around ten exit bullet holes on the side of Copeland's residence, police say.

As they were searching, they heard several gunshots coming from within the home.

The officers took cover -- but soon Copeland came out through the garage of the home. He complied with police instructions and was arrested without incident.

The house, however, had a strong odor of gasoline, and police say that utilities had to be shut off before the house could be searched.

Additionally, the interior of the home had extensive property damage.

The suspect was living with family members after his recent release from prison for arson charges. Police say the weapons belonged to the homeowner and were properly secured at the time of the shooting.

He was charged with attempted arson, property damage and unlawful use of a firearm. Bond was set at $50,000.

Court records show he had previously pleaded guilty to arson charges from the O'Fallon Police Department.

Here's a larger version of that mugshot, just in case you weren't satisfied with the smaller one up top.

And the full report from St. Peters police:

St. Peters, 04/08/2013: The St. Peters Police Department arrested a male suspect in connection to a shots fired call located on the 1st block of Julie Lane. The male suspect was identified as:

At approximately 11:30 am on Monday April 8th, our officers received a radio call for shots fired in the area of Julie Lane. Upon arrival, a neighbor reported, what appeared to be a bullet, coming through the drywall of her house. As officers were looking through the area, they discovered approximately 10 exit bullet holes on the side of Mr. Copeland's residence. As officers were searching the area, they heard several other gunshots coming from within the house.

Officers immediately took cover and Copeland exited the residence through the garage. He complied with the officers instructions and was arrested without incident. The house had a strong odor of gasoline and all utilities had to be shut off before the house could be searched. There were no injuries associated with this incident. The interior of the home had extensive property damage.

It was later discovered Mr. Copeland was residing with family members after just being released from prison last month for Arson 2nd degree.

The weapons in the incident belonged to the homeowner and were property secured inside of the home prior to the shooting.

Mr. Copeland was charged with Attempted Arson 2nd degree, Property Damage 1st and Unlawful Use of a Firearm. St. Charles County Prosecuting Attorney's Office issued on all charges with a $50,000 bond, no 10%.