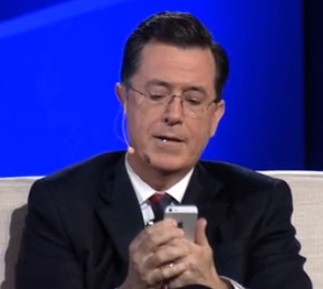 Comedy Central host Stephen Colbert was at Washington University over the weekend to tape his first-ever interview with Clinton -- and one part of the show that aired last night that has Twitter abuzz this morning is...the section about Twitter!

How did Colbert convince Clinton to join? Video below.

Here's footage of the interview via Hulu.

"No," Clinton replies. "I think I'm so sort of insecure, like, if you know, what if you tweet and nobody tweets back?... There's nothing worse than a friendless tweeter. You're just wandering around in cyberspace." (We feel you, dude).

"I took the liberty of opening you a Twitter account," Colbert later says, noting that President Clinton and William Jefferson Clinton were taken.

And thus the account was born -- and soon so was his first Tweet, dictated by Clinton and typed on air by Colbert:

Just spent amazing time with Colbert!Is he sane? He is cool! #cgiu

The account has more than 45,000 followers as of this writing (Does that address your insecurities, Mr. President?!), but is only following one person: @StephenAtHome.