As we've reported, St. Louis Police Sergeant Gary Wiegert is suing the department, alleging that officials have tried to suppress his free-speech by blocking his pro-marijuana reform lobbying. He is in favor of reducing the punishment in cases of low-level possession offenses as a way to save law enforcement resources -- which is why he signed up to work as a paid lobbyist for advocacy group Show-Me Cannabis in the first place.

Wiegert, however, does not have the support of St. Louis Alderman Shane Cohn -- who has been pushing for the very kind of local marijuana reform that Wiegert is advocating.

"I don't believe that any police officer should be able to lobby," Cohn tells Daily RFT. "It's completely unethical."

We recently got a chance to ask Cohn for his take on the metro police department controversy -- and despite his legislative work at the Board of Aldermen, Cohn tells us that he doesn't think a police officer should take on paid lobbying work in this manner.

Cohn has been pushing a bill that would encourage St. Louis law enforcement officials to prosecute minor offenses in the lower city court as opposed to the circuit attorney's office. He argues that it could save limited police resources -- and reduce the consequences for those guilty of the lowest marijuana offenses. That bill is close to getting final approvals and could formally pass when the board resumes on April 15.

His bill has the support of the circuit attorney's office and Cohn says that the police department has endorsed it, too, though SLMPD officials have been silent on the matter in the wake of this free-speech lawsuit. 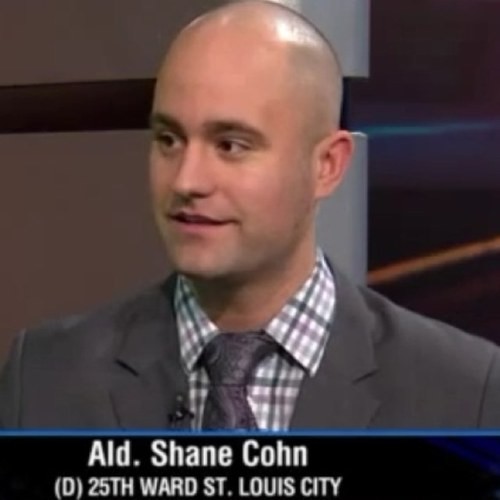 In that suit, Wiegert alleges that he informed his higher-ups that he would be doing lobbying on the side and that when they found out the nature of his lobbying, they revoked original approvals and said he wasn't permitted. The department has not commented on the suit, citing ongoing legal action related to a personell matter, but has said that Wiegert does not represent SLMPD in his comments.

And Cohn, it seems, supports efforts to stop police lobbying on the side.

Continue for more of our interview with Shane Cohn.

"This is not a freedom of speech issue," Cohn says. "He's getting paid.... As a police officer, there's a certain set of expectations you have with your employer."

Cohn argues that other city employees aren't allowed to do this kind of lobbying based on Civil Service Commission rules and that eventually, employees of the police department, via local control, will be banned as well.

He says he has no problem with Wiegert speaking out -- but not in a paid position that creates this kind of conflict.

If he "wants to go out on his own time and dime as a private citizen," then it would be acceptable to advocate for these reforms, Cohn says.

As both a formal lobbyist and city police officer, "I don't think it's appropriate," he adds.

Wiegert was hired for Show-Me Cannabis to promote statewide legislative proposals for reform. (There are no legalization proposals on the table at this time, though one poll says a majority of Missourians support full-on regulation).

Check out our previous interviews with Show-Me Cannabis and Wiegert's attorney, who both argue that the sergeant has a right to do this lobbying work and that the department is illegally blocking his free-speech.