As we've reported, lawmakers have pushed this year to repeal the death penalty in Missouri with a proposal that is not likely to get far in the legislature. State Senator Joe Keaveny, a Democrat who represents St. Louis, is supportive of an end to capital punishment in the state -- but he's taking a different approach.

His legislation, Senate Bill 61, would require the state auditor to conduct a study on the costs of administering the death penalty.

"Let's see how much we are spending and if we indeed want to be spending that money," Keaveny tells Daily RFT.

Does his bill have a shot?

So far, his legislation has gotten more traction than State Senator Gina Walsh's death penalty repeal proposal -- but he is still facing obstacles.

Keaveny's proposed bill, draft on view below, says that the state auditor must compare the costs of three kinds of cases, when:

"The goal is just to provide people with some unbiased information about what it costs to execute somebody," Keaveny explains, adding, "The death penalty is so emotional.... That's why I want the auditor to do it." 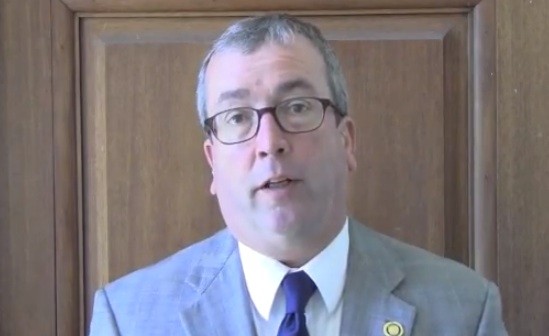 As we noted in our coverage of Walsh's repeal proposal, in Missouri, 68 people have been executed since 1976 and two since 2005. The state ranks fifth in terms of the number of prisoners that face the punishment. Opponents of the death penalty argue that it's very costly and unfairly applied -- and can at times be used against individuals wrongfully convicted.

Keaveny's audit bill had a hearing at the end of last month and is scheduled for possible perfection today. (Walsh's bill, it appears, had a first and second read and remains stuck in committee).

But a proposed amendment is creating problems, he tells us.

Continue for more details on his bill's progress in the Senate and for more information on the death penalty in Missouri.

His colleagues in committee have proposed an add-on to his bill that would require the auditor's report to be paid by private funds -- which the senator opposes.

"It is the job of the auditor to tell us how we are spending our money," he says, arguing that just because this is a controversial issue like the death penalty, they shouldn't have to raise private funds to pay for a study.

Keaveny tells us he's still deciding what to do about the proposed amendment and would still like his bill to move forward without that stipulation.

In the meantime, he's also proposed what's called a "concurrent resolution" bill that would direct the oversight division of the committee on legislative research to study the death penalty costs -- as another option.

His office notes that there have been studies on capital punishment costs in states across the country, funded in a variety of ways. And his staff also points to an American Bar Association report from last year that highlighted a number of flaws in the application of the death penalty in Missouri, such as a need for more best practices to protect against the execution of innocent people as well as the drain capital punishment has on the underfunded state public defender's system.

If the state did an audit, Keaveny says, lawmakers would be better equipped to debate a potential repeal.

"The next discussion is going to be, 'Do we want to spend that kind of money?'" he says.

Here are the full drafts of both legislative proposals.