The recent closure of a popular children's destination in Valley Park has led to an online backlash with parents complaining that the venue left them in a lurch.

"It's been quite a nightmare. We were getting trashed on Facebook before we even opened," says Kristin Berry, owner of the Frisco Train Store that last weekend took over the space previously occupied by Whittle Shortline Railroad.

Last month Whittle Shortline Railroad moved to a new location in Kirkwood, leaving behind the historic hotel in Valley Park where it had earned a national reputation for manufacturing wooden toy trains and being a popular destination for kiddie play dates and birthday parties.

A status update on Whittle's Facebook page this week, which announced that it had moved and was no longer open to the public, generated more than a dozen comments from confused and upset parents. 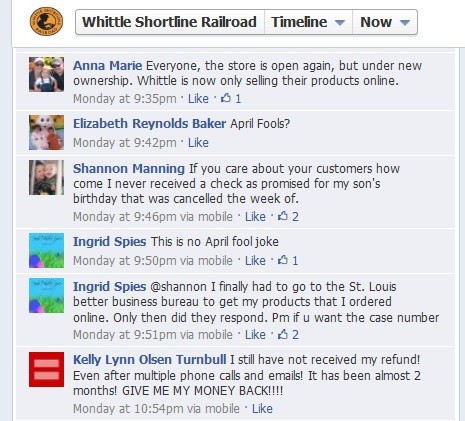 At issue are the birthday parties that Whittle booked prior to closing down its business in Valley Park in late February.

Berry, who had previously worked for Whittle owner Mike Whitworth, says she agreed to take over some of those parties when she opened up her new train store in the old hotel. But it turns out that Whittle had booked many more than she realized -- even after the company knew it was leaving. "We thought we were going to honor fifteen parties," she says. "It's now been 22 that we've run at our cost."

Whitworth, meanwhile, tells Daily RFT that Berry seems to be picking and choosing which parties to honor. (A claim Berry says is completely untrue.) He adds that his company has had some setbacks over the past several years. In 2008 the flooded Mississippi River forced the company to shut down its factory in northeast Missouri, costing it three months of manufacturing. Since then the company -- which has expanded into puzzles -- lost millions of dollars of product when government testing found contaminants in the sealant it used to treat its wood pieces. (Whitworth says the company is currently in litigation with the company that made the sealant.) Court records show that the state has sued Whitworth's American Puzzle Co. and Whittle Toy Co. on multiple occasions in recent years for failure to pay unemployment contributions.

Whittle Shortline Railroad opened in Valley Park in 1999, using a hotel that dates back to the 1800s as both its factory and retail shop. Eventually the business became too big to continue manufacturing inside the hotel, and those rooms were converted to areas for birthday parties.

Given the popularity of his business with children, Whitworth says he's not all that surprised people are upset by the move. But at 65 he says he's looking to retire, though Whittle Shortline Railroad will continue to sell trains through its website, woodentrain.com.

"Our toys are relatively expensive, and when we started out we knew many kids in the neighborhood probably couldn't afford them," says Whitworth. "So we built this big train table and put it in the front of the store. It just grew from that. We told people to let the kids play, and parents really liked that."