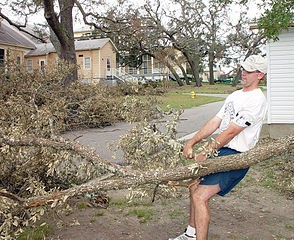 St. Louis is just filled attackers this week who are getting creative with their choice of weapon.

Earlier today, we told you about the angry handyman hitting a guy with a hammer. Another dude waved a box-cutter at random strangers at a bus stop, sending one woman to the hospital.

And now, we bring you the story of a man who used a branch to attack another man. Yes, a branch.

In this first-degree assault incident today, St. Louis metro police say that a 40-year-old man showed up at a home on the 4900 block of Maple Avenue where he was "supposed to be spending the night."

Apparently, he was barking up the wrong tree.

The suspect, a male around 35-40 years old, refused to let him in, police say.

They argued and then, the report says, "The suspect attacked him with a branch."

In case you missed that: "The suspect attacked him with a branch."

The victim told police the man then attacked him with "what he believed to be a knife," cutting him on the hand.

The suspect went back into his home and the victim went to the hospital, where he was listed in serious/stable condition.

As of this writing, police say they don't yet have more details they can offer about this branch...like where it came from, why this guy was holding a branch or had one in his house, what kind of branch it was, how recently it was plucked from a tree, ETC.

We'll let you know if we hear more.

Incident: Assault 1st (Cutting)
Location: 4900 block of Maple
Dates/Times: 04/05/13
Victim(s): 40-year old black male
Suspect(s): black male, 35-40-years old, 5'7-5'9, 160-170 lbs, dark comp The victim reported to an officer he had had been cut in the hand. Victim stated he responded to an apartment in the above address where he was supposed to be spending the night. The suspect responded to the door and denied him entry. An argument ensued and the suspect attacked him with a branch. He then attacked him with what he believed to be a knife, cutting him on the hand. The suspect went back into the house. The victim was conveyed to a local hospital and is listed in serious/stable condition. The investigation is ongoing.