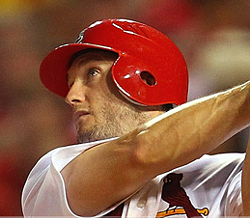 So this just happened.

Mike Tyson will be in St. Louis tonight for his one-man show, and today, he's doing some good old-fashioned Twitter promoting in advance of his visit.

This includes a polite request that David Freese swing by.

Will the Cardinals third baseman make it?

Sadly, no. But he has a legit excuse!

Im gonna miss ya. In Memphis this weekend. Have a great show. RT @miketyson: @dfreese23 David, I'm in your city. Come see me tonight! #stl

No hard feelings, it seems. Freese got a Tyson retweet.